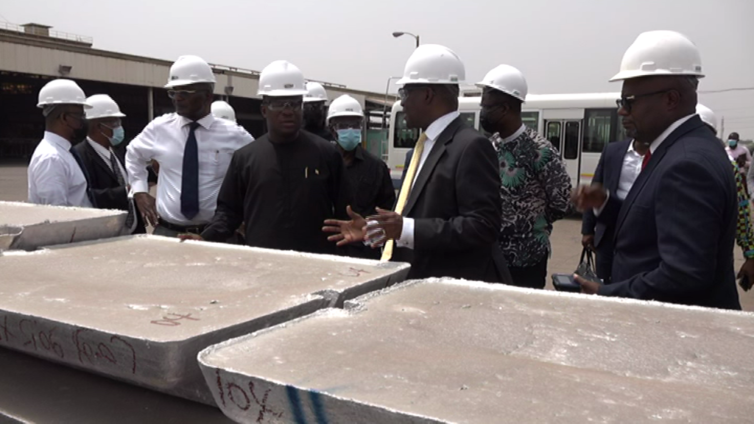 Government is expected to turn around the fortunes of Volta Aluminum Company Limited (VALCO) as the country explores potentials in the value chain of aluminum.

The wholly owned Ghanaian company over the last decade has struggled owing to several factors including lack of consistent capital injection although government recently injected $ 3 million to support acquisition of equipment, rehabilitation among things.

Minister for Lands and Natural Resources, Samuel Jinapor speaking at a recent working visit to the company in Tema with officials of GIADEC said President Akufo-Addo is keen on building the industry.

“The government through the Ministry of Lands and Natural Resources and GIADEC has successfully put in place the framework and the building blocks to develop the industry,” he said.

GIADEC is mandated to execute four key projects which could transform the country’s bauxite.

First of the four project is the expansion of the existing mine at Awaso to increase production from one million tonnes to five million tonnes per annum and the building of a refinery.

Project II focuses on development of a mine at Nyinahin-Mpasaaso with a production capacity of five million tonnes per annum and a refinery solution.

The third project looks at the development of a mine at Kyebi, a second refinery at Nyinahin-Mpasaaso, each with a production capacity of up to five million tonnes per annum and the building of a refinery.

The last project centres on modernization and expansion of the VALCO smelter to improve efficiency and increase capacity.

To successfully carry all four projects, about $6 billion is needed.

By this, VALCO will help add value to the over 700 million metric tonnes of bauxite deposits at Kyebi and Nyinahin to generate over $1.05 trillion.

As envisioned by government, the Integrated Aluminum Industry will have a bearing on the economy through creation of over two million jobs.

Minister for Lands and Natural Resources believes with a concerted effort over a period of time, government’s objectives with the industry would materialize.

According to Chief Executive Officer of GIADEC, Michael Ansah, VALCO is very much at the core of GIADEC’s strategic plan to develop the entire value chain.

“VALCO remains core of everything around bauxite mining, alumina refining and aluminum smelting and ultimately the development of the downstream industry so that we can lock in value of what we are doing,” he said.

He indicated that the board of VALCO has since 2019 worked very closely with management to ensure growth despite current financial challenges.

“Government recently injected about $3 million to help with equipment among things to help stabilise its operations to address its balance sheet restructuring issues and attract the needed investment of about $700 million to modernize the entire plant with new technology,” he explained.

The company is also faced with high cost of power making it not competitive compared to the global market.

Meanwhile, for Chief Executive Officer of VALCO, Dan Acheampong, says the company will take its rightful place if the needed investment is available.

Globally, there is high demand for aluminum and the country could cash in under the Integrated Aluminum Industry plan.

DISCLAIMER: The Views, Comments, Opinions, Contributions and Statements made by Readers and Contributors on this platform do not necessarily represent the views or policy of Multimedia Group Limited.
Tags:
GAIDEC
Lands and Natural Resources Ministry
Samuel Abu Jinapor
VALCO