Government will not allow people to benefit from illegality – Dominic Nitiwul - MyJoyOnline.com

Government will not allow people to benefit from illegality – Dominic Nitiwul 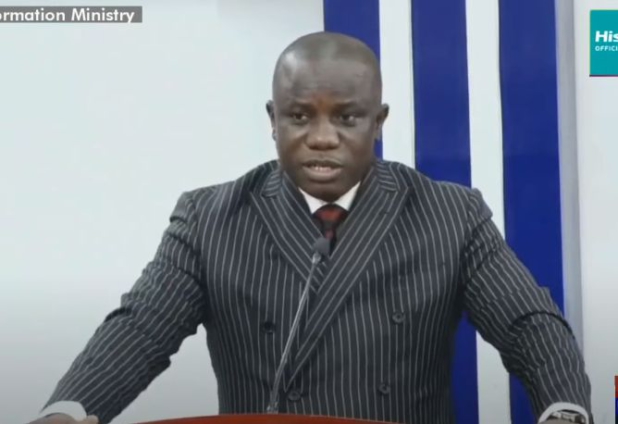 Minister of Defence, Mr Dominic Nitiwul has stated that government will not allow people to benefit from illegality.

Speaking at a press conference, June 2, at the Information Ministry, Mr Nitiwul pledged to halt every act by illegal miners in their quest for gold during which process they pollute water bodies.

He made this statement in regards to the recent operation by the Ghana Armed Forces (GAF) in curbing illegal mining along water bodies.

“We will not allow people to benefit from illegality. The law is very clear on that, government will continue to pursue illegal miners until such a time that we have clean water bodies.

It does not happen in our neighboring countries and we should not allow it to happen, not in Ghana. We are hardworking people and government will support hardworking people, but when you decide that you alone will destroy the environment, our water bodies and forest reserves and our land, because you want to make money, government will not allow that to happen,” Mr Nitiwul said.

His comment comes as a response to the ongoing speculation by some Ghanaians that aside military officials unjustly destroying excavators and other mining equipment of miners, pieces of gold found on the galamsey sites were seized.

Reacting to that, Dominic Nitiwul noted that these military officials are fully briefed and complying with the rules of engagement laid down by the incumbent government, therefore, any item confiscated or destroyed is recorded and made known to the general public.