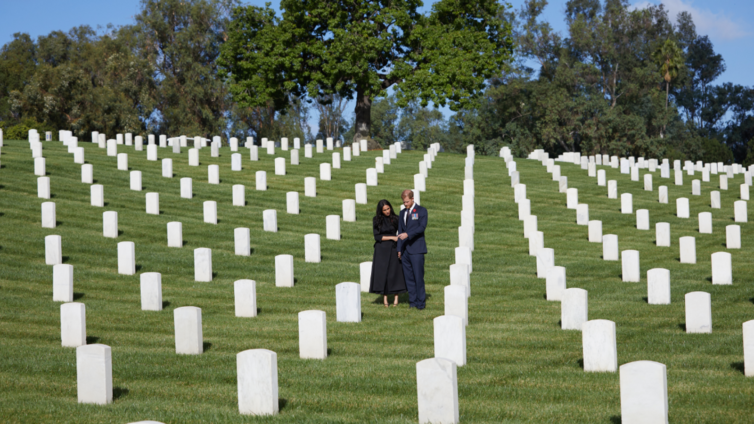 The Duke and Duchess of Sussex held their own wreath-laying ceremony on Remembrance Sunday in Los Angeles.

While a socially distanced event took place at the Cenotaph on Whitehall with other royals, Harry and  Meghan honoured fallen soldiers from their new home.

Harry, who served on two tours of duty in Afghanistan, wore a blue suit adorned with three medals and a poppy.

Meghan also wore a poppy, as the couple paid their respects to the armed forces.

The pair were pictured walking through the Los Angeles National Cemetery.

Meghan laid flowers from the couple’s garden on the graves of two Commonwealth soldiers.

One was in the Royal Australian Airforce and the other the Royal Canadian Artillery.

The couple also laid a wreath, which Harry signed with the message: “To all of those who have served, and are serving. Thank you.”

A statement from the couple said: “It was important to The Duke and Duchess to be able to personally recognise Remembrance in their own way, to pay tribute to those who have served and to those who gave their lives.”