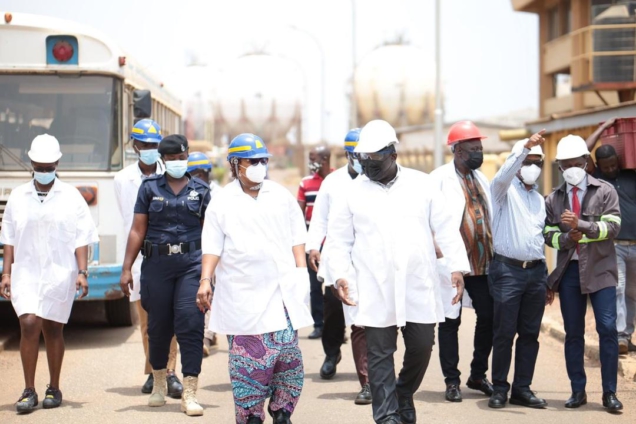 The Minister for Fisheries and Aquaculture, Hawa Koomson has commended Tema Oil Refinery (TOR) for its role in ensuring that there is an uninterrupted supply of premix fuel to all landing beaches in the country.

According to the Minister, the steady supply of premix fuel for fisher folks in the country remains a topmost priority for her ministry.

She thus assured Ghanaians that her ministry would collaborate with Tema Oil Refinery (TOR) and the Premix Secretariat as well as other stakeholders to ensure the steady availability of premix fuel to ensure productivity in the country.

The Minister made these remarks during her familiarization visit to TOR, the first SOE to be visited by the Minister since she assumed office in March 2021.

The visit offered Madam Koomson, the opportunity to interact and gather useful information on the processing and distribution of the commodity and the strategic role played by TOR.

The Minister toured parts of the refinery including its loading gantry where premix fuel and other products are lifted by clients through BRVs.

The Managing Director of TOR, Francis A.T Boateng expressed his appreciation to the Minister for choosing Tema Oil Refinery as the first SOE to visit, weeks after the Energy Minister had also paid a working visit to the refinery.

“The familiarization visits by both the Minister of Energy some weeks back and now the Minister for Fisheries and Aquaculture, have shown that Tema Oil Refinery (TOR) remains an important national asset that contributes to both Energy Security and National development.

Mr. Boateng expressed willingness on the part of the refinery to cooperate with the Ministry of Fisheries and Aquaculture to realize the Ministry’s goal of ensuring an uninterrupted supply of premix fuel in the country.

The Distribution Manager for TOR, Madam Rosina Fiagbe stated that on average, TOR is able to load about thirty-seven to forty trucks of 13,500 liters of premix fuel on daily basis.

She said the refinery considers increasing the quantities to about 50 trucks whenever there is an upsurge in the demand.

She explained that the allocation of premix fuel is carried out by the Premix secretariat while TOR works to release the product through its loading gantry.