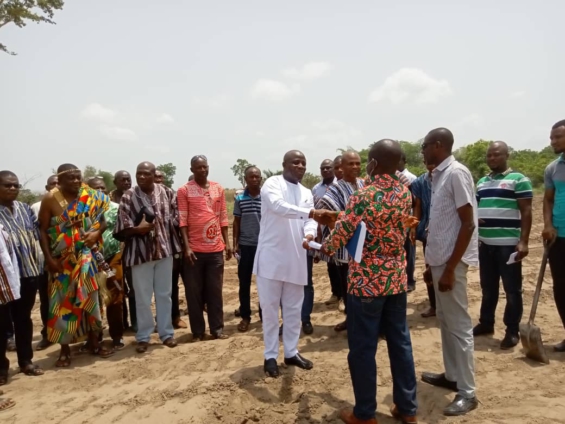 The Municipal Chief Executive for Hohoe, Noble Daniel Awume, has cut sod for three major projects to be executed in the Municipality.

The projects are in 3 parts. The first will see to the construction of garages with T.D.K Atlantic as the contractor. This is pegged at GH¢2,424,359.34.

The second project which cost GH¢2,490,514.51, is a 10-unit facility police and fire post and a 20-seater toilet facility. This will be constructed by Harrow and Barrow Limited.

The first and second project will be completed in the next 10 months.

The final project involves the Hohoe Central Market. This is at a cost of GH¢1,535,365.93 and it’s expected to be completed in 8 months by Bumecon construction firm.

According to Mr Noble Daniel Awume, the projects form part of the President’s vision to make Hohoe Municipality one of the most vibrant business cities in the country

“And these projects will have a positive outlook on the municipality. “The municipal assembly will do all it can to ensure businesses have the right facility and environment to grow,” Mr Awume added.

He noted that the growth of businesses will lead to the growth in revenue for the assembly.
Mr Awume urged residents to keep hope alive and have faith in the government to provide more projects to the benefit of all.

Some residents who spoke with JoyNews expressed gratitude for the projects and prayed that more of such initiatives be brought to the Municipality.

According to the residents, the projects will have some of the unemployed youths get meaningful jobs and enhance economic activities.