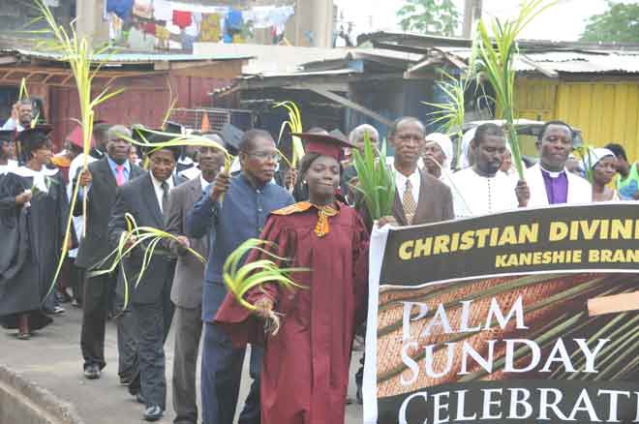 Christians in Ghana have joined their counterparts all over the world to commemorate the Palm Sunday, a day that marks the beginning of the Holy Week on the Christian calendar.

The day, which marks the final Sunday of Lent, is believed to symbolise the triumphant entry of Jesus Christ into Jerusalem where he rode on a donkey, days before his arrest and crucifixion.

It has been christened ‘Palm Sunday’ because according to the gospels, the people in Jerusalem placed palm fronds in Jesus’ path and hailed him amid shouts of Hosanna.

Some churches in the country made small crosses from palms to celebrate the day. Others held various processions to reenact their saviour’s entry into the city of Jerusalem.

This year’s celebration of the day received several reactions and trends on social media platforms, especially on Twitter.

While celebrating the joy that comes with the day, some users recollected memories of how Christ was betrayed.

“Christ enters his own city to complete his work as our Saviour, to suffer, to die, and to rise again. Let us go with him in faith and love, so that, united with him in his sufferings, we may share his risen life.”#PalmSunday #Hosanna #LiveLent pic.twitter.com/CdXnmIFKu2

The same people who were shouting, “Hosanna” on Sunday were shouting, “Crucify him” five days later. Be always Careful for what you are reaching for because It seems impossible for people to be so fickle. Happy Palm Sunday 🌴

Blessed is he who come in the name of the Lord. #PalmSunday #Hosanna pic.twitter.com/eoEsMyjwzz

Hosanna to the Son of David! pic.twitter.com/TjCKS7yrPy

Jesus rode into Jerusalem on a donkey to the cry of “Hosanna to the king!” But the people were worshipping Him for who they wanted Him to be. They wanted political deliverance while Jesus was offering so much more. Worship Jesus for who He is and not for who you want Him to be.

#PalmSunday – Christ rode on a donkey then. Soon He enters on a stallion. The crowd HAILED Him King one day. Less than a week later they cheered when He was NAILED to the cross. Crowds are fickle but Christ is faithful. Christ > Crowds. #Hosanna pic.twitter.com/eTVTZ2aLPO

A version of this hymn was being played in the tour bus that day … Hosanna! #PalmSunday https://t.co/kCqNsFyDQP pic.twitter.com/fZ87pA1HsJ

They took palm branches and went out to meet him, shouting:

Today marks the entry of Jesus into Jerusalem, and is also the start of Holy Week.

Have a blessed Sunday! pic.twitter.com/yNSQYlaf9D

And the crowds that went before him and that followed him were shouting, “Hosanna to the Son of David! Blessed is he who comes in the name of the Lord! Hosanna in the highest!”
Mt 21:9 pic.twitter.com/RqatsHqowF

The same crowd that shouted Hosanna was the same that cried Crucify Him. What an irony of life! There is no greater King than the one that offered Himself as sacrifice to save His people. May all Glory , Honor and Adoration be ascribed unto Him, Amen. pic.twitter.com/KBxxtIDmMg

A donkey, not a war horse. Peace instead of violence. A beginning, not an ending.

Hosanna! Hosanna!! Hosanna!!!
Blessed is the king who comes
in the name of the Lord. Hosanna in the highest.
Luke 19:38
Hosanna to the King of Kings.
Happy #PalmSunday2022 everyone! pic.twitter.com/7cidjc1df8

Jesus was in the center of the procession and the people all around Him were shouting: “Hosanna! Blessed is He who comes in the name of the Lord!” Mark 11:9

The way this conductor lead the songs this mass, he had emotions for every song. I almost cried singing “Hosanna to the Son of David”.

Hosanna to the Lord 🙏🏽💯 pic.twitter.com/9XHRDIhCWS

and just like that, it’s finally Holy Week 🙏🏽 my fave week of the whole year! to say i am excited, would be an understatement. this is such a special time for us Christians and it’s our most special week! Hosanna in the Highest, Blessed is He Who Comes in the Name of the Lord 🌿 pic.twitter.com/lBQZPTKSZC

People, it is Palm Sunday so let’s talk some politics & religion.

It is most unacceptable for a Prez, His Vice & Finance Minister to spend the last 5mons talking economic austerity by imposing a draconian new tax regime called Elevy on us only to jet off to a church in the USA.

“Hosanna to the Son of David! Blessed is He who comes in the name of the Lord! Hosanna in the highest!”
Matthew 21:9

Blessed #PalmSunday. As we prepare our hearts and minds for the Holy Week ahead, may God continue to envelope us with His love and peace, His strength and wisdom pic.twitter.com/jMbRTiveGE

Most of y’all don’t even know today is Palm Sunday.Go to Church kakraa Eei, if ebi Vienna programs like you know all till December 😂

Today is Palm Sunday. Jesus enters into Jerusalem on a donkey. Donkeys have a cross on there backs. Jesus came in a cross and left on a cross. How great is our God.. pic.twitter.com/P1PbTU0Hs7

Holy, Holy, Holy, Lord, God of hosts. Heaven and earth are full of your glory. Hossanna in the highest. Blessed is He, who comes in the name of the Lord.

Today is Palm Sunday(ụka ọmu), marks the final days of His ministry.
May the blessings of God be with you as we celebrate. pic.twitter.com/mIijQOfqFR

Don’t forget to thank the Lord for all the blessings we receive everyday, no matter how big or small that is.

Have a Blessed Palm Sunday everyone. Stay safe and healthy. 🙏💙