I was sexually abused by a priest, then I became a priest - MyJoyOnline.com

I was sexually abused by a priest, then I became a priest 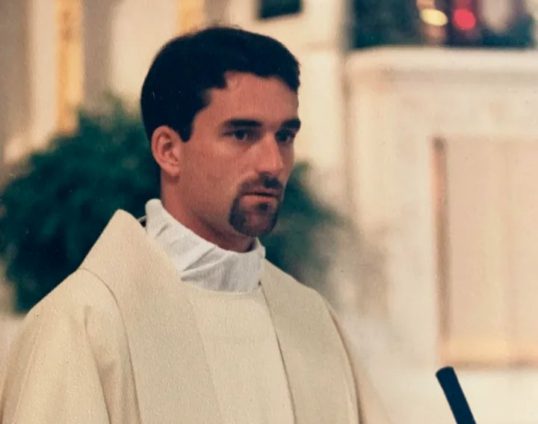 The author at Saint Mary Parish, in Ridgefield, Connecticut, in the late 1990s. Courtesy of Robert D. Karpinski.

In November, a report from the Nebraska attorney general’s office identified hundreds of victims who’d made “credible allegations of sexual abuse against 57 Catholic Church officials in the state going back decades,” according to The Associated Press ― including “many that high-ranking church leaders knew about and didn’t report to the authorities.”

Also in November, a lawsuit was filed against the Diocese of Charleston, South Carolina, as well as the bishop of the diocese, claiming that “a child was sexually abused by a priest at a Catholic church in Myrtle Beach between 1990 and 1994,” per the CBS affiliate WBTW.

Robert Greene, director of the Netflix documentary “Procession,” sums up the experience of being sexually abused by clergy when he says: “The thing to know about this abuse is not just being sexually abused in such a tender age, it’s being abused by an entire belief system. The Catholic Church indoctrinates believers into a worldview which is demonstrated by these rituals and symbols, and so it’s a level of abuse that is just very difficult to comprehend. There’s no fixing that. There’s no giving back to these guys what was taken from them. All we could hope to do is move forward.”

As a survivor of five years of child sexual abuse at the hands of a Catholic priest in Philadelphia, I have had over 30 years to process my lived experience of abuse within a powerful, male-dominated religious organization.

There must be systemic change in the structure of all-male leadership in the Roman Catholic Church.

While I am certainly not the only victim of a priest’s abuse, I also belong to a smaller subset within that community. In the spring of 1993, seven years after the abuse ended, I was ordained a Catholic priest myself.

Instead of running away from the Catholic Church or adopting a different religious tradition, I dove into the institution. As a child, my siblings and I were taught to love the church. Our family life and traditions revolved around its worship and rituals. In a real sense, I bonded with the Catholic Church at a level that drew me into its life, despite the sexual abuse. When I entered the seminary at the age of 18, I suppose this deep level of bonding prevented me from acknowledging that the institution and one of its ordained representatives was hurting me.

I was ordained on May 29, 1993. Over the course of my nine years in active ministry, I went several times to the authorities within the Archdiocese of Philadelphia to report my sexual abuse. I asked that my abuser be removed from ministry.

They offered thoughts and prayers, but no change.

My abuser remained in active ministry. He was eventually put on limited ministry, but at one point, one of my sisters saw him in the church sanctuary with altar boys and girls. Once again, I asked for him to be removed.

Thoughts and prayers, but no change.

Change started to happen in 2002 when The Boston Globe published the results of an investigation resulting in the criminal prosecution of five priests of the Archdiocese of Boston. Within the Catholic Church, across the country, the façade began to crumble. Dioceses were swept up in grand jury investigations and arrests of clergy, and the faithful were left wondering how any of this could happen within their church.

As a Catholic priest, I testified before a Philadelphia grand jury. I had already shared my story with my immediate family and a few friends, but this was the first time I felt that anyone with authority heard and believed me. The tears and support I received from my family and friends were matched by the tears I saw on the faces of many of the grand jurors as they listened to me, a priest dressed in his clerical collar, share my story.

Still, the priest who sexually abused me, and who is accused of abusing numerous other children over many years and in many parishes, was never prosecuted. He was finally laicized ― removed from the clerical state ― by the Catholic Church decades after his ordination. He was then shuffled from parish to parish, assignment to assignment, because preserving the institution was more important than keeping children safe. In other words, the institutional, male-dominated church circled the wagons around the perpetrator while offering us, yes, thoughts and prayers. In the end, my abuser was never prosecuted because the statute of limitations in Pennsylvania expired.

The reality of being heard and believed by investigators from the Philadelphia district attorney’s office and the grand jury, along with the scope of the abuse crisis nationally, made it clear to me that I needed to walk away from active priestly ministry in the fall of 2002. I could no longer keep ministering within an institution that had failed to protect me, and failed to protect thousands of other children. While I was on retreat before leaving active ministry, my retreat director offered words of support I will never forget. He said: “As a boy, a priest murdered your soul. As a priest, the Church has broken your heart. So now you will use your mind to heal those experiences.”

I loved my nine years of priestly ministry and the good that it allowed me to do. However, I knew in the deepest part of my being that I needed to move beyond priesthood in order to save myself.

Still, I have never walked away from the knowledge that I must keep the issue of sexual abuse by Catholic clergy front and center in my life. After the years it took me to verbalize and admit what happened to me, I cannot go back in time to ignore, pretend or deny.

The Catholic Church has made an effort at reparations for victims, which is an acknowledgement of its painful past. While there is now greater visibility and more conversations and apologies about sexual abuse within the church, as well as a desire for more transparency, the institution needs to dig deeper into its structures of leadership, priestly formation and theology of priesthood.

As a survivor, I want to be sure no other child suffers what I did as a boy. One of the ways to ensure this is through systemic change in the church hierarchy. The leadership must chart a path forward with the diverse voices of victims, women and non-clergy in order to move well beyond thoughts and prayers.

Robert D. Karpinski has been at DePaul University since 2009. He currently oversees University Library operations along with the DePaul Art Museum, Office of Academic Events, Academic Integrity, DePaul College Prep and the George Ruff Institute of Global Homelessness. Rob is an adjunct professor in the Department of Religious Studies. Before moving to Chicago in 2002, he was a Roman Catholic priest in active ministry within the Diocese of Bridgeport, Connecticut. As a priest, he served in parish ministry as well as high school education and priestly formation. He holds a Ph.D. in educational administration and supervision from Fordham University in New York and an M.Div. from Saint Charles Borromeo Seminary in Philadelphia.