IGP surprises woman by paying for her item on New Year's eve - MyJoyOnline.com 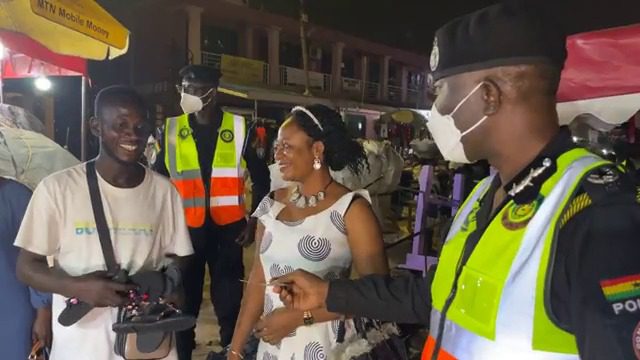 The Inspector-General of Police (IGP), Dr George Akuffo Dampare, took to the streets of Lapaz on New Year’s eve to familiarise himself with residents as they crossed over into 2022.

The IGP and his patrol team had interacted with many traders and others on a bustling night acquainting himself to the security situation in the area while noting feedback as well.

On his commute, a young lady was in the middle of a transaction with a slippers vendor.

The IGP interacted with the parties involved and volunteered to foot the woman’s bill.

She looked surprised but accepted the offer. However, the vendor was hesitant to take the money from the police chief for the service rendered.

Upon further impression, he accepted the ¢15 marked price, thanked the IGP and packaged the pair of slippers for the lady.

The IGP was in the company of some divisional and regional commanders.

On that same night that Dr George Akuffo Dampare’s patrol team chanced on a group of people celebrating their final day of the year at a noodle joint in the area amid revellers, traders and residents.

The gathering did not expect to see the Police chief in their vicinity that fateful night, but their feast choice left the IGP equally gobsmacked.

A grin-engulfed young man was flanked by three others over a pack of Indomie Instant Noodles and three bottles of the alcoholic beverage, Guinness.

A visibly shocked IGP asked what name they gave to the combination on the table.

One of them responded, “Guinness-Domie,” as they all burst out in laughter.