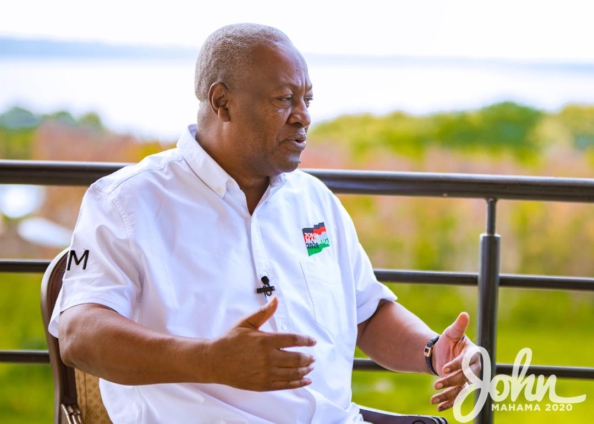 Former President John Mahama says his decision to seek re-election is to provide jobs for the teeming youth of the country.

According to him, youth unemployment is a major challenge in the country and if elected as president, he will put in place plans and resources to address the phenomenon.

“In Ghana, we have a youth bulge and we are sitting on a youth time bomb. That is why my main thrust of seeking leadership again is on finding jobs for our young people. All those young people you see; the main concern and challenge they have is non-availability of jobs”

The NDC Flagbearer said that his next government intends to create over one million jobs within four years.

Mr. Mahama indicated that his reign as president between 2012 and 2016 focused on social and economic infrastructure development; a period in which huge investment was made into physical projects.

“When I got into office, it was social and economic infrastructure development and so I made huge investments in infrastructure. In my next administration, everything will be geared towards jobs. It is to create jobs for the young people,” he said.

He questioned what the governing party did with some GH¢140 billion it has allegedly borrowed since attaining power.

John Mahama further revealed his government will embark on expansionary policies by injecting $10 billion into the industry sector of the economy in a bid to create about three hundred thousand jobs in a year.

“We are going to inject money into infrastructure development again because that will involve the construction industry, engineering and so on.

“This will bring a lot of artisans and everybody back to work. We are looking at the big infrastructure push and we are going to inject $10 billion to expand roads, complete 200 SHS as well as finish all the hospitals we were building,” he concluded.