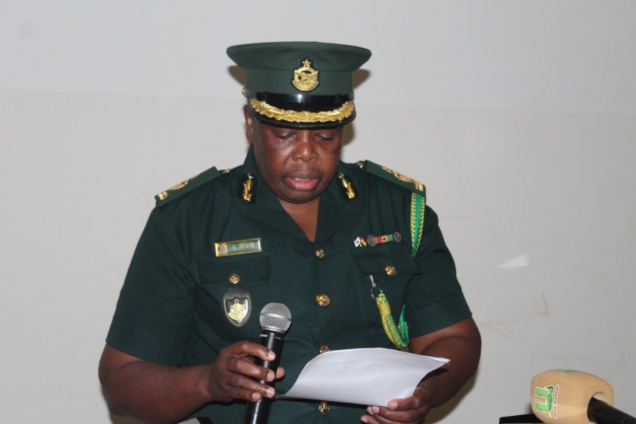 Some officers of the Ghana Immigration Service (GIS) in the Bono Region are receiving training in Sunyani to build their knowledge base in document security.

This is expected to enable the officers to execute their mandate well and safeguard the country’s borders.

The participants include immigration officers from the out-stations in the region.

The project, funded by the Government of Denmark and implemented by the International Centre for Migration Policy Development (ICMPD), and the GIS as the beneficiary, is aimed at supporting the Government of Ghana (GoG) in strengthening their institutional and operational capacities to manage irregular migration flows.

Speaking at the opening ceremony, the Bono Regional Commander of the GIS, DCI Eric Afari, said any operational lapses on their part as officers in the performance of their duties, especially along the borders, which remain closed except the airport, will be costly and have dire consequences on the security of the state.

He said as immigration officers, they have to remain vigilant at all times and discharge their duties with the highest level of ethical and professional standards.

With the Migration Information Centers in some strategic locations, including Sunyani, the GIS is enjoined to sensitize the general public on the dangers of irregular migration.

As Ghana’s neighbors have been experiencing recently, DCI Eric Afari explained they have the mandate to protect the frontline against infiltration by transnational criminals, and more importantly, against potential terrorist incursions.

Additionally, “we are to prevent the use of fraudulent documents by a small number of innocent travellers and other criminally minded persons who use technology to create forged travel documents for unsuspecting travellers”, he said.

Given these huge and sensitive responsibilities, officers of the GIS need to regularly update their knowledge on global migration trends and acquire the relevant skills and expertise to ensure effective discharge of their mandate, hence the training.

The GIS Bono Regional Commander assured the participants that “the program has been designed and tailored to fill the capacity gaps in their training architecture as a service, and also to address the key thematic areas of the GIS mandate, as enshrined in their operating laws and related enactments”.

These include security profiling and detection of fraudulent travel documents, sensitization on irregular migration, and health education issues in the face of COVID-19.

He noted the training would also “sensitize the selected officers on the draft GIS Contingency Plan, especially on how to identify early warning signals, health emergency response, and refugees management”.

DCI Eric Afari expressed the Service gratitude to their development partners who sponsored the development of their 5-year strategic plan and continue to fund their programs, including the document security training course across the country.

A representative of the 17 member state international organization, ICMPD, Chief Superintendent Kofi Asano, said their presence in Ghana is to partner with the Government of Ghana (GoG) and its agencies in areas of migration research, dialogues, and capacity buildings to build on the good foundation already laid.

He revealed that the ICMPD, active in over 90 countries worldwide, has over the years, implemented projects like Migration EU Expertise (MIEUX), Support to Free Movement of Person, and Migration in West Africa (FMM).

He said, in all, over 300 GIS frontline officers will be trained in basic document security, a knowledge every Immigration officer should have.

DISCLAIMER: The Views, Comments, Opinions, Contributions and Statements made by Readers and Contributors on this platform do not necessarily represent the views or policy of Multimedia Group Limited.
Tags:
Document security
Ghana Immigration Service (GIS)
Sunyani
Training