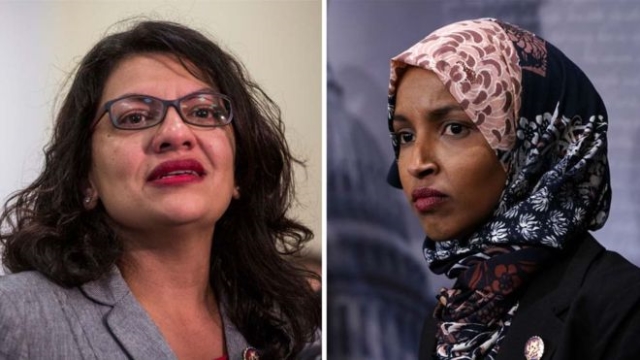 Israel is blocking two US Democratic lawmakers, who are prominent critics of the Israeli government, from visiting.

Ilhan Omar and Rashida Tlaib were due to visit the occupied West Bank and East Jerusalem next week.

Both have supported the boycott movement against Israel, but Israeli law allows supporters of the campaign to be banned from visiting.

President Trump earlier tweeted it would show “great weakness” if the pair were allowed entry.

Ms Omar described Israel’s move as “an insult to democratic values and a chilling response to a visit by government officials from an allied nation”.

Mr Trump earlier had taken to Twitter to urge that the two lawmakers be blocked from visiting, adding that “they hate Israel & all Jewish people, & there is nothing that can be said or done to change their minds”.

Ms Omar and Ms Tlaib have both been criticised for their stance on Israel – but have denied charges of being anti-Semitic.

Speaking to reporters later on Thursday, Mr Trump said, “I can’t imagine why Israel would let them in.

“But if they want to let them in, they can, but I can’t imagine why they would do it.”

Why have they been banned?

Israeli law blocks entrance visas to any foreigner who calls for any type of boycott that targets Israel – either economic, cultural or academic.

The law attempts to suppress the “boycott, divest, sanction” movement, which has drawn growing support across Europe and the US.

Israeli officials had earlier said they would make an exception for the elected US officials, before backtracking.

According to US media, their trip was meant to begin on Sunday, and would include a stop at one of the most sensitive sites in the region – a hilltop plateau in Jerusalem known to Jews as the Temple Mount and Muslims as Haram al-Sharif.

They also planned to visit Israeli and Palestinian peace activists and travel to Jerusalem and the West Bank cities of Bethlehem, Ramallah and Hebron. 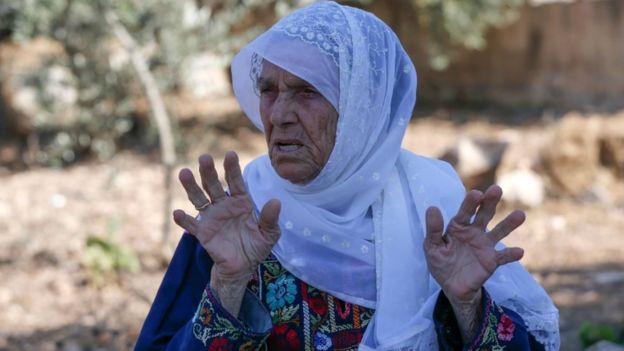 The trip to the West Bank was planned by Miftah, an organisation headed by Palestinian peace negotiator Hanan Ashrawi.

Ms Tlaib was planning to stay for two extra days to visit her grandmother, who lives in a Palestinian village.

President Trump, who has a close relationship with Israeli Prime Minister Benjamin Netanyahu, has frequently feuded with the lawmakers and in remarks widely condemned as racist, told them to “go back” to the countries that their families were from.

Ms Tlaib – the first member of the US Congress of Palestinian descent – was born in Michigan, and Ms Omar is from Minnesota but was born in Somalia.

After the Democratic-led House of Representatives voted against the boycott against Israel movement in July, Ms Tlaib criticised the country as “racist”.

“I can’t stand by and watch this attack on our freedom of speech and the right to boycott the racist policies of the government and the state of Israel,” she said. 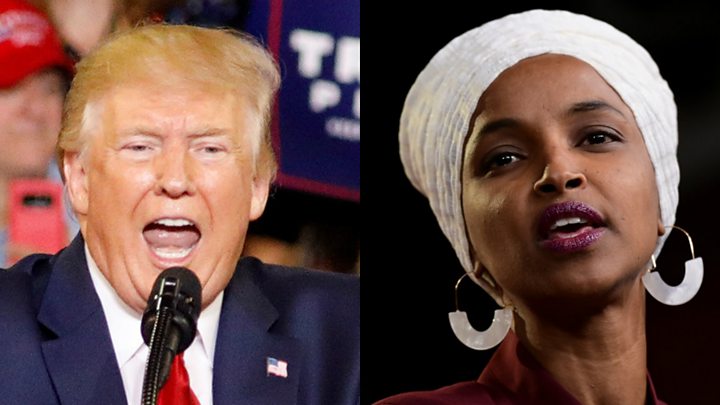 The House also voted to condemn hate speech in a move directed at Ms Omar for her criticism of US support for Israel.”It’s all about the Benjamins baby,” Ms Omar had tweeted in a reference to the US $100 note, leading to allegations that she was using a negative stereotype for Jews.

She later apologised, and said the tweet was meant to criticise lobbyists, not Jews. She also thanked “Jewish allies and colleagues who are educating me on the painful history of anti-Semitic tropes”.

What has Israel said?

A statement from the Israeli Interior Ministry confirming the ban said it was “inconceivable that those who wish to harm the state of Israel while visiting would be granted entry”.

But only last month Israeli Ambassador Ron Dermer said the two Democrats would be permitted to visit “out of respect for the US Congress and the great alliance between Israel and America”.

In a statement on Thursday, Mr Netanyahu said “there is no country in the world that respects the US and the American Congress more than Israel.”

“However, the itinerary showed that the congresswomen’s sole intention was to harm Israel.”

The US ambassador to Israel said in a statement that the US “supports and respects the decision of the Government of Israel to deny entry”.

Israel “has every right to protect its borders against those activists in the same manner as it would bar entrants with more conventional weapons,” wrote Ambassador David Friedman.

The American Israel Public Affairs Committee (AIPAC), said in a tweet while they disagree with the lawmakers’ support for the boycott movement against Israel, they also believe “every member of Congress should be able to visit and experience our democratic ally Israel firsthand”.

It was a sentiment echoed by Republican Florida Senator Marco Rubio, who said that while he disagreed with the women, “denying them entry into Israel is a mistake. Being blocked is what they really hoped for all along in order to bolster their attacks against the Jewish state.”

New Jersey Democrat Congressman Tom Malinowski called the decision “disrespectful to Congress” and said during a cross-party congressional trip to Israel last week officials had assured them their colleagues would be allowed to visit.

“First he tells Congresswoman Tlaib to ‘go back’ to ‘her’ country, and then he tells that country not to let her in,” he tweeted, referring to Mr Trump’s comments.

Speaker of the House Nancy Pelosi, a California Democrat, said “this sad reversal is deeply disappointing”.

She called Israel’s denial “a sign of weakness” and said President Trump’s comments “a sign of ignorance and disrespect”.

Has this happened before?

The ban on two foreign dignitaries is rare but not unprecedented. Makarim Wibisono, a UN special rapporteur on human rights, was denied entry in 2015 after Israel said his mandate was anti-Israel.

Fouad Ahmad Assadi of Spain’s Socialist Party, was barred from entering Israel last month because he was deemed a threat to national security.

The Lebanese-born politician travelled there to participate in the annual Socialist International conference in Tel Aviv and Ramallah – but he was denied entry at Ben Gurion Airport.

However, no members of US Congress have been blocked before now. Israel often hosts congressional delegations. Earlier this month, 41 Democrats and 31 Republicans attended a visit sponsored by the AIPAC lobby group