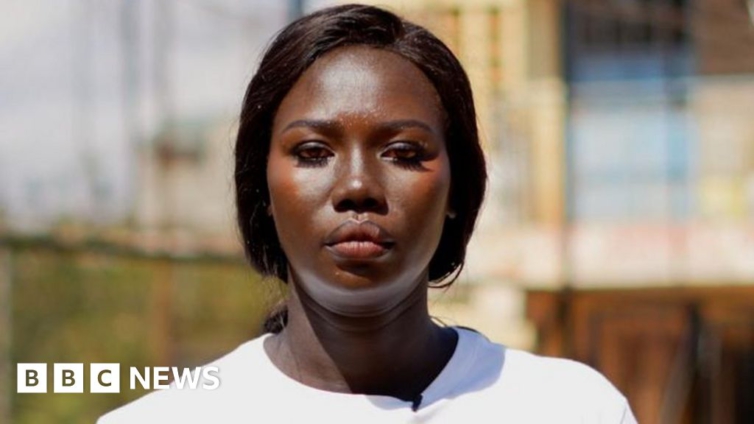 Basketball scout Sarah Chan’s career has taken her all over the world, from Sudan to Kenya, Europe and the US – but she’s had to face war, racism and gender-based violence along the way.

“I have been spat in the face for the colour of my skin,” says the former professional basketball player.

“I’ve experienced racism in more ways than I would like.”

Now the first woman to manage African scouting for a team in the NBA – the world’s top professional basketball league – Ms Chan is inspiring a new generation of young people to seek out opportunity in the sport.

“Basketball illuminated my way to where I am today. It is everything,” says Ms Chan, who is featured in the BBC 100 Women list of inspiring and influential women this year.

She and her family lived in Khartoum during the second Sudanese Civil War. There were several attempts to arrest her father and she recalls often being woken in the night by noises outside their house.

Eventually they fled, hoping to find a safer life and better education in Kenya.

“It was the first place that we could actually enjoy the right of playing sports, because in Sudan [playing] sports and seeing a girl or woman in shorts was a taboo,” says Ms Chan.

It was here that her passion for basketball would emerge. She remembers a conversation that led to her and her sister playing the sport for the first time.

“I remember being one of the tallest kids in school in Kenya and our principal approached us and asked if we could play.

“And at the time, honestly, my mind wasn’t there. And so I said, with all respect I didn’t want to join – and because of that, he immediately made sports mandatory.”

After years of training, she went on to secure a four-year undergraduate basketball scholarship at Union University, in Jackson, Tennessee, in the US. Over a 14-year playing career, she competed professionally in Europe and across Africa.

“Through basketball you touch so many hearts. Basketball changes lives,” she says.

But Ms Chan also encountered racism in the sport – including an incident she says happened when she travelled to Algiers, with her team mates and was spat at on the face by a man.

“Without the foundation of what my family instilled in me, I wouldn’t have been able to withstand all of that,” she says.

“Right before I left home, my dad and my mum said, ‘You’re beautiful just the way you are.'”

When she took her first trip back to South Sudan in 2012, Ms Chan witnessed injustices against women, including early and forced marriages.

“At the age of 18 you’re expected to start looking for a mate,” she says.

Girls are forced to choose whether to stay in school “or to get financial relief from the man that the family might choose for you”, she explains.

“I cried for way too long.

It got to a point where I was done crying and I needed to find out what I could do to contribute towards making some things right.”

And so Ms Chan started the Home At Home/Apediet Foundation, a mentoring charity to combat child marriage and advocate for education and sport.

She remembers a time she was watching a game when a girl came to sit next to her on the bench.

“She wasn’t even a basketball player, she was just a random kid that came to the court and started opening up to me and told me a gut-wrenching story of how she had got raped the night before,” she says.

“And it really took me apart because I have had my own traumatic experiences with rape. And it took a long time to heal.

“In the beginning I was in denial – [I thought] that such trauma and rape didn’t happen to six-foot-two girls. Then anger, then grief, and it makes you feel just worthless and helpless and bitter.”

For her, healing has come from doing “one of the hardest things” and forgiving the perpetrator – and also from her work with the foundation.

“I came from poverty and we figured it out,” she says.

“These kids only need an opportunity because they’re very gifted, smart and able.

“Somebody helped me to start playing sports, and without them doing that, I wouldn’t be where I am today.”

Despite being a male-dominated sport, Ms Chan thinks that the potential for women’s basketball on the continent is bright.

“Sports is the future of Africa. It’s the weapon of Africa, especially for the girls,” she says.

She takes her mentoring work seriously, she says, “because people saw things in me that I hadn’t already seen”.

It was through coaching that she landed her role with the Toronto Raptors, after an NBA executive spotted her working at a basketball camp in Kenya.

Now employed by the team, which was founded in 1995 as part of the NBA’s expansion into Canada, it’s Ms Chan’s job to spot emerging talent – both male and female – to support the players’ development and create a pipeline to open up basketball opportunities for them in North America.

She recently travelled to Uganda and Tanzania to pick players for a major tournament in Rwanda next year.

“It’s my hope that ‘ball gets to the point where there’s a WBAL, a Women Basketball African League,” she says.

“They’re free and liberated truly in their minds, and can chase their dreams as human beings, not restrained or limited by being this or that gender.”

DISCLAIMER: The Views, Comments, Opinions, Contributions and Statements made by Readers and Contributors on this platform do not necessarily represent the views or policy of Multimedia Group Limited.
Tags:
Basketball
Black woman
Sarah Chan
Skin colour