Joel Bortey: Tough loss against Brazil but there is time to work on mistakes 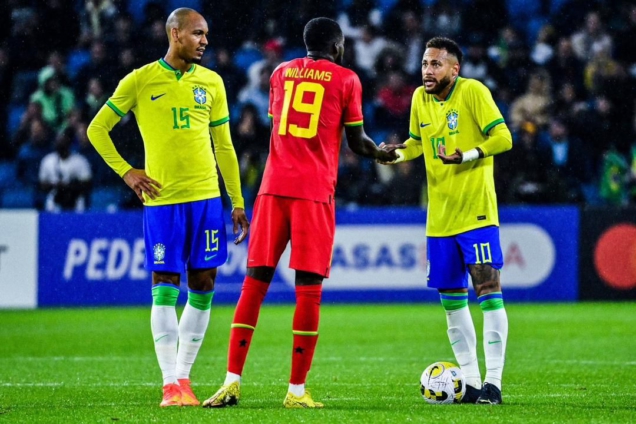 Many Ghanaians had 23rd September circled on their calendars as there was hope of seeing a much-improved Black Stars with 5 new additions to the already existing squad, but Otto Addo some way somehow, quenched the burning fire of hope in Ghanaians an hour to kick off with an unpardonable lineup.

Keyword, unpardonable, because no way you maintain a lineup that has been oozing mediocrity when quality has been brought in with little to no time before the World Cup starts.

Social media was ablaze at the sight of the starting eleven and the 33 million Ghanaian coaches were justified before halftime.

Brazil had been described as the ultimate test, but Ghana failed 40 minutes before kick-off. Why? Because the game was approached as if it were a mere amateur kick out against the number one ranked team in the world according to FIFA.

In the words of former Chelsea coach, Thomas Tuchel, “We have the same problems because we have the same players.” At this point, it sounds like a broken record trying to talk about the Black Stars and their issues. The first-half performance against Brazil was just a carbon copy of what we have been putting out almost every international break in the last year, if not more. And it comes as no surprise that an attack of Neymar, Vinicius Jnr, Raphinha and Richarlison looked deadly/punished us whenever they were facing our goal.

The performance during the first 45 minutes was very frustrating to the eye and even more damaging to the heart seeing the likes of Mohammed Salisu, Inaki Williams, Tariq Lamptey and more, on the bench when we needed to see what they could bring to the Black Stars against a world class opposition.

In the second 45 minutes that Inaki came in, he had the same number of shots as Neymar and Raphinha (3) unlike Afena-Gyan, who was able to take just one shot. Beyond just the shots, Inaki’s movement, reading of the game and pace were all of quality and there was a clear distinction as to why we got it wrong from the start.

Two out of the three goals Ghana conceded were from set pieces. And for a nation that wants to compete at the Mundial, defending set pieces are non-negotiable. Richarlison, Marquinhos, Thiago Silva, Militao, and Casemiro. These players have an outstanding aerial presence; therefore, it was mandatory to never leave those players unmarked or open. Unfortunately, we did so, and we were duly punished.

Focusing on the issue of personnel, it’s a no-brainer that captain Andre Ayew is not cut out for midfield work. The 32-year-old in midfield with Mohammed Kudus and Baba Iddrisu was always caught out of position or not having the required pace to progress the ball out of the crowded central area of the pitch. Despite having 4 recoveries during the game, he did not have the defensive awareness that was required whenever Ghana lost possession.

Kamaldeen Sulemana is another name that keeps me wondering. When will we ever see the brilliance of the youngster in a Black Stars jersey? He’s been excellent on the left-hand side for club side Stade Rennes but against Brazil, we saw him take the right-hand side of the pitch which was clearly not helpful. He was able to complete just one pass into the final third and was dispossessed four times. Some players were not called up to the squad that are hungry to flourish on the right wing and if we are going to keep playing Kamaldeen we are setting him up for failure.
Ghana’s best right winger, Osman Bukari, of Serbian club Red Star Belgrade should have been preferred, but rather we did not see him take the pitch at all. In 9 league games played this season he’s scored 4 times (the most by any red star player) and assisted once. For the Black Stars he’s been instrumental on counter attacks and a great crosser of the ball.
This leaves the question, was this a naïve experiment?

This is not the first time Ghanaians are not happy seeing Jordan Ayew on the left side of an attack and it was an eyesore seeing him partner with Reading left-back Baba Rahman. In the entire 90 minutes, Jordan Ayew had 0 total shots and 0 accurate crosses completed out of the 4 he took and did not create a single chance as well. His compatriot, Baba Rahman was caught ball-watching on several occasions, and it was as though he was new to football. He did have some good moments in the second half, but the pairing on the left could have been better.

Denis Odoi suffered in the hands of Vinicius Jnr, but most fullbacks will definitely go through the same. However, I must say, his second-half performance was much better.

Most players had an improved performance in the second 45 minutes and that was due to a change in the system and also the addition of some players right after the halftime break.

Very few positives.  To start with, the change in system in the second half was the best decision by Otto Addo. Mohammed Salisu being introduced brought life to the defence. This meant the wingbacks in Denis Odoi and Baba Rahman had help whenever Ghana had to regain shape and close the spaces in which the Brazilians operated. In the 45 minutes Salisu played, he completed 22 out of 25 passes made, 5 recoveries, 4 clearances and 2 blocks. He also completed 3 passes into the final third, one of which led to a goalscoring opportunity. One of which saved us from conceding a fourth goal.

Mohammed Kudus, who lasted 84 minutes was our best player of the night. He created 3 chances. No Ghanaian created more on the night and only Neymar (6) created more than the Ajax star.

It was clear, that Ghana was better on the counters, with the pace of Inaki Williams, Kofi Kyereh, and Mohammed Kudus, and this definitely needs to be worked upon.

With what we saw against Brazil, Ghana duly failed the Brazil litmus test irrespective of the result. But there are two friendlies to work on the mistakes identified. Ghana should not be in panic mode yet but should definitely treat the tiniest of details with urgency and importance. Nicaragua will be our next test on Tuesday and a victory against them should be non-negotiable. Should Ghana not make any major improvements it will definitely call for concerns.

DISCLAIMER: The Views, Comments, Opinions, Contributions and Statements made by Readers and Contributors on this platform do not necessarily represent the views or policy of Multimedia Group Limited.
Tags:
Brazil
Ghana
Joel Bortey