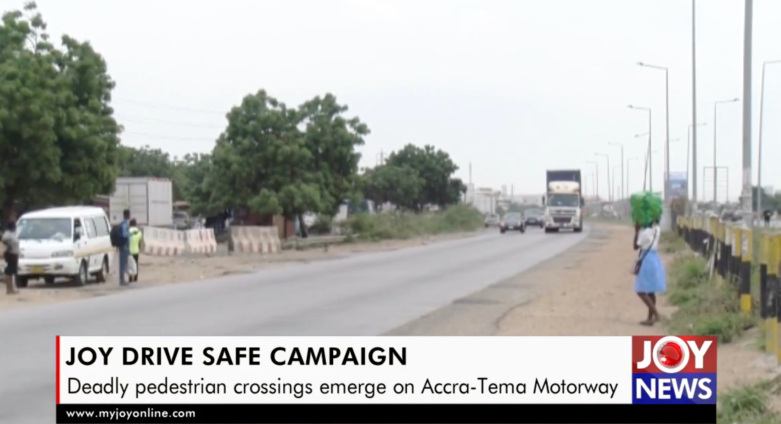 The sun is out in its full glory. Most of the workers here at a community very close to the Accra-Tema Motorway, Klagon, seek refuge under trees and any shed available. About 100 metres away is a young lady in a school uniform carrying a bag on her head.

In there, are provisions expected to last for the term at school. The teenager I later got to know as Elizabeth Kotei had been waiting for more than 10 minutes to cross this section of the Accra-Tema Motorway to board an Aflao bound bus to her school, St. Catherine SHS.

As she likes to be called later, Betty told me it took longer to cross the road because of the flashback of losing her friend Vanessa at the same unapproved pedestrian crossing. Vanessa’s dreams and aspirations were crushed in that single bang.

“I was struggling a lot to cross the road. It is very dangerous. I lost my friend just here just last year. She was also going to school just like me.”

Across the street at the Klagon lorry terminal is a young, enterprising lady, Beauty Doe. She sells specially made ‘Volta Region’ biscuits at the lorry station.

She enjoys patronage from residents at Klagon. Some of the drivers also buy from her during the waiting period for their cars to get filled.

Beauty had developed a mother and daughter relationship with a middle-aged woman who used to sell very close to her, one hajia. She says it was a normal day on Saturday, and hajia had closed around 4 pm.

She tried to cross the road to her home, but she was knocked down by a speeding vehicle on the Accra-Tema motorway.

“On Saturday when she came, we were all here, we had a hearty conversation, and I told her she was looking beautiful. Then, the next day Sunday, I was at home, I got a call, and I was informed that she had died,” she said.

In the Klagon community, everyone seems to know a person who was knocked down by a vehicle whilst crossing the motorway. These deaths have left a scar on the minds of many of the residents. That, however, has not deterred them from crossing the motorway-they had no choice.

The Tema Motorway has now been caught up in the urban sprawl. There are settlements everywhere along the road. And with these settlements have come deadly pedestrian crossings where people are being killed.

Many unapproved crossings can be found at the Manet area, Tetteh Quarshie Interchange, very close to the Accra Mall, the Accra end of the Motorway and many others.

Some motor riders have also taken advantage of the situation to do illegal U-turns on the 19km stretch.

Mohammed Tijani is an Okada rider. He has seen many people who attempted crossing the motorway crashed into lifeless human parts.

“One of them was a girl; she had just returned from school. She was speaking on the phone. She was knocked down by the car, and it ran over her.

“Her intestines gushed out. I was the one who went to buy a polythene bag. I collected her remains into the polythene bag”.

That was not all for Tijani Mohammed as he continued to narrate some of the heartbreaking scenes he has witnessed on the motorway.

“A young man was also crushed by an articulated truck; he died after severe head injuries.

Drivers who ply the Accra-Tema Motorway are equally concerned about the dangers on the expressway. They say it is more dangerous at night, especially at poorly lit sections.

One of them told me how he skidded off into a bush when he tried to avoid knocking down a man who was in black clothes and crossing at a dark section of the road.

DISCLAIMER: The Views, Comments, Opinions, Contributions and Statements made by Readers and Contributors on this platform do not necessarily represent the views or policy of Multimedia Group Limited.
Tags:
Accra-Tema motorway
Joy Drive Safe Campaign