JoyFM to present another ground breaking edition of Showbiz A-Z from Kumasi - MyJoyOnline.com 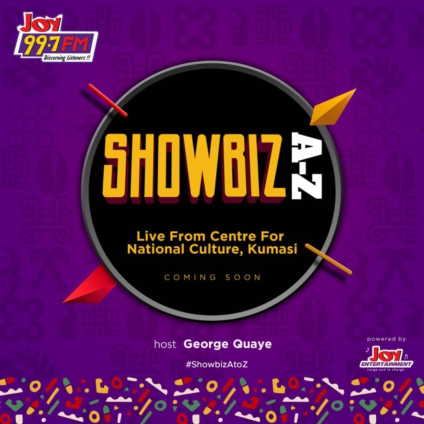 Ghana’s most authoritative entertainment talk show, Showbiz A-Z, is once again bringing culture to your doorstep with its special edition that will come to you live from the Ashanti Region in March this year.

The team goes on a journey of exploring and discovery within Asanteman’s rich tourism borders, crowning it with a detailed conversation on March 5, 2022 to essentially mark Ghana Month on Joy.

This is a well thought–out plan to replicate the success of its 2021 edition, during which the radio show was broadcast live from the Central Region.

The Cape Coast Castle played host to Showbiz A-Z, during which panelists, in retrospect, discussed Ghana’s tourism industry and whether or not the country is truly harnessing its full potentials. The spotlight was also thrown on the city of Cape Coast which is described as the hub of tourism, its educational history and cultural relevance.

As March approaches, so does Ghana Month on Joy. To celebrate it, Showbiz A-Z has lined up a rich itinerary that will take place in the Ashanti Region, and will broadcast live from the Center for National Culture in Kumasi.

The well-seasoned crew, led by Head of Production at Joy Entertainment, Philip Nai, will together present, and explore magnificent tourist destinations in the beautiful golden city of Kumasi.

The refreshing and exciting tour will be followed by an observation of traditional rites, including pouring of libation. A display of the rich Ashanti culture is imperative; drumming, dancing, showcasing of original Bonwire Kente and many more informative activities.

Host George Quaye will also lead the conversation into unravelling the mystery and untold stories of the Ashanti Kingdom as well as discuss its evolution and contribution to tourism and the creative space at large. The conversation will admit experienced and well-resourced panelists, in the company of some notable personalities from the region, some paramount chiefs and representatives from some of the tourist sites.

The entire show will broadcast live on Joy 99.7 FM. Social media fans can catch up with the live stream on Facebook.