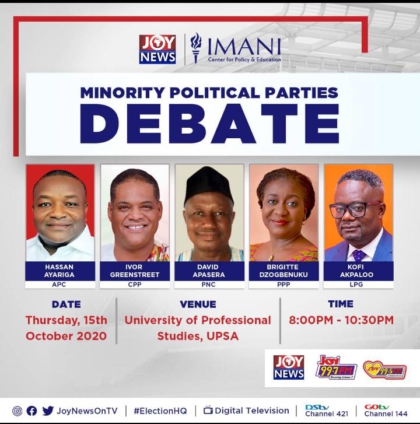 JoyNews’ Election Headquarters in collaboration with IMANI Centre for Policy Education is set to hold a minority political debate that features several political parties at 8:00 pm on Thursday, October 15 2020, at the University of Professional Studies, Accra (UPSA).

The coverage of the event will be broadcast live on JoyFM, LuvFM and JoyNews.

Speaking to JoyFM, Head of Political Desk, Mr Evans Mensah relayed that several flag bearers of the minority political parties will feature in the upcoming debate.

The debate is will feature the flag bearer of the All People’s Congress (APC) Mr Hasan Ayariga, Mr Ivor Greenstreet of the Conventions People’s Party (CPP), Mrs Bridgete Dzorgbenuku of the Progressive People’s Party (PPP), and the People’s National Convention’s (PNC) Mr David Apasera among others.

The debate will probe into the capacity of minority political parties to move the 2020 general elections into a run-off as was experienced in the 2008 General Elections.

Concerns and promises presented by the political parties in their respective manifestoes towards the December polls will be also be investigated.