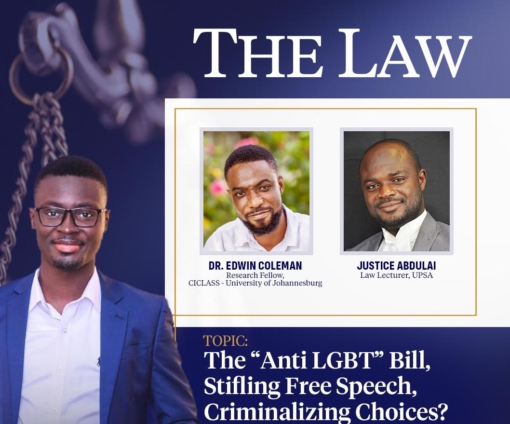 Last week, the country was hit with a private member anti-LGBT bill that got members of the general public expressing diverse opinions on social media.

While a section of Ghanaians hold the view that the bill as presented will uphold proper human sexual rights and the Ghanaian family values, others have disagreed stating that portions of the bill seek to infringe on human rights as well as free speech among others.

On the matter of protecting human rights, the Member of Parliament for Ningo-Prampram, Sam Nartey George, who is part of the originators of the 36-page anti-LGBT bill, stated categorically on Joy FM‘s Midday News, that the 1992 Constitution of the Republic of Ghana does not consider same-sex relationships as a fundamental human right.

He described the decision of LGBT persons as a human preference.

But some legal practitioners have projected doom for free speech in the country should the bill in its current state be passed into law by Parliament.

Cambridge Researcher, Oliver Barker-Vormawor intimated that sex between opposite genders is considered illegal in the drafted bill as sex between same-sex couples. He leveraged on the definition of pansexual in the bill to defend his assertion.

The proposed bill defines a pansexual as “a person who engages in a sexual or romantic activity with persons of any gender identity or expression including persons who do not fit into the binary sex categorisation of male and female.”

Explaining his point, he said, “The law does define what is meant by pansexual activities, and it says a pansexual means a person who engages in a sexual or romantic activity with a person of any gender.”

Aside from him, legal practitioner, Martin Kpebu stated that portions of the bill seek to burden the state with more financial obligations as victims of LGBT activities will be supported.

For him, this is a bad move since the government has been unable to sufficiently support battered women and abused children.

“We have to get serious. Let us deal with domestic violence first. First things first. You haven’t finished dealing with it and you are running for another fund,” he bemoaned.

Today on The Law, host, Joseph Ackah-Blay and his panellists, Dr Edwin Coleman, a research fellow at CICLASS, at the University of Johannesburg and Law lecturer at UPSA, Justice Abdulai, will leave no stone unturned as they dissect all angles of the anti-LGBT bill and the possible threats to free speech.

The show will also look at how feasible the bill if passed into law can be enforced. The hour conversation starts at 2 pm prompt on JoyNews.

According to the 36-page anti-LGBT bill, “clauses 19 to 23 deal with the protection and support for victims, accused and other persons. These provisions are included as a recognition of the distinction between lifestyle activists and persons who engage in the acts prohibited by the Bill as a result of social, cultural, financial, medical, psychological or biological reasons. This is in recognition that as minorities, these persons need the support, protection and love of the majority, to help them overcome their vulnerabilities and to give them options so that may be helped.”