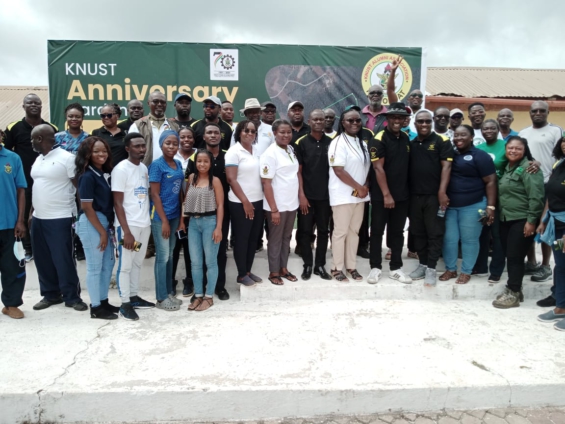 The Vice-Chancellor of the Kwame Nkrumah University of Science and Technology has underscored the need to preserve Ghana’s protected forests.

Prof Rita Akosua Dickson hinted that forest reserves are constantly being depleted because people do not know their benefits.

She was speaking at a tree planting exercise organized by the KNUST alumni association as part of the 70th Anniversary celebrations of the University at Akuapem Mamfe in the Eastern Region.

The tree planting will boost the setting up of an arboretum on the Akuapem Ridge.

According to her, apart from providing the needed oxygen for human and animal survival, forests also serve as the habitat of most animal species and a learning grounds for research work.

The Chief of Akuapem Mamfe who is also the Kyidomhene of Akuapem, Osabarima Ansah Sasraku donated a 7-acre land for the commencement of the Arboretum.

In his address, he stated that the project, when completed will explore herbal medicinal opportunities and recreation.

Nana Ansah Sasraku, an alumini explained that the economic, social and cultural benefits of the forest could not be overruled because of the potential it has in attracting tourists and conserving the climate.

“One of the disturbing conditions, I mean climate change which causes rainfall shortages, tidal waves, flooding among others, can be checked when we protect our forest by planting more trees,” he stated.

The Global President of the KNUST alumni, Kwaku Agbesi explained that the alumni will play a key role in the setting up of the arboretum.

He called on the association members who are mostly technocrats and successful businessmen and women to commit themselves to the cause of the project.