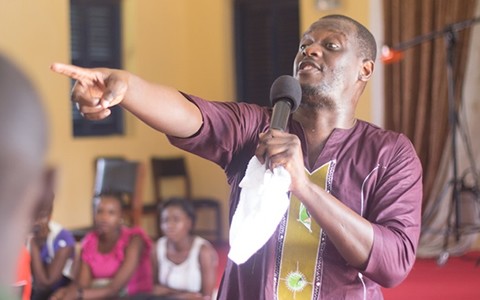 According to him, some celebrities go wayward because there is nobody to correct them when they go wrong.

Speaking in an interview on Music Box on Hitz FM with Andy Dosty, the Evangelist said celebrities are most often persuaded by some praise singers to think that they are demigods so they lose sight of the fact that they are human beings who have been elevated by God.

Due to this, the need for counselors to continuously direct their path so that they would not lose track of who they are.

“When you attain stardom to some level, you begin to feel that the whole word belongs to you, so you need someone who you revere so much to advise you at that point in order not to go astray,” he said.

He explained that even powerful people like the biblical David and Macbeth all had counsels who directed them on issues that arose in their lives and that contributed to their successes.

The once fastest rapper in Ghana continued that, self-egoism sometimes befalls celebrities, which mostly lead to their downfall, are caused by people he described as ‘cupboard lovers’ (friends who always come close to you because you have enough financial resources for them to feed on).

Abraham Kenya hinted that celebrities, who see themselves above all humans due to the continuous false respect they get from the public, friends are mostly neglected by their fair-weather friends when their careers take a nose dive.

The ‘Sika Baa’ hit maker disclosed that he used to have such friends around him who accompany him to every public function but they later turned their backs on him when his funds run out.

He, therefore, cautioned the current crop of celebrities to be wary of such people and learn from mistakes of their predecessors.