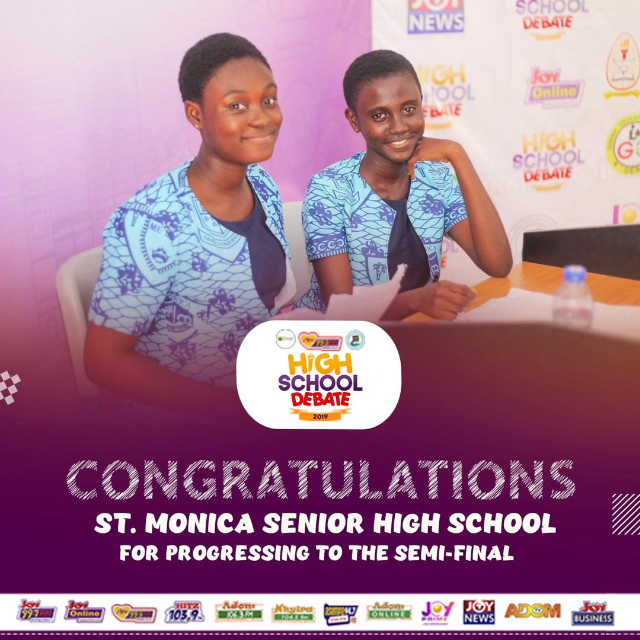 As schools battled for spots in the semi-finals of this year’s LUV FM High School Debate, St Monica’s SHS came in strong, arguing for the motion, “Military Rule is More Relevant to Our Political Circumstances than Multi-party Democracy.”

Saint Monica’s argument in favour suggested intolerance has become the order of the day in the current democratic dispensation.

“Our leaders who are power-hungry do not think about our wellbeing.  Elections under democratic government are marked by violence and bloodshed, intolerance is the order of the day.”

The Principal speaker quizzed, “Is this the democracy we are standing for? In our current political circumstances, we need a military rule to unite us”.
KNUST SHS speakers forcefully made the point Ghana’s development woes, despite her economic potential could be blamed on the string of military take-overs.

“Ghana has at least experienced five successful coups, are they not the reasons our development have slowed down over the years?

Military Rule supersedes the worst form of corrupt governance, this is because military rulers are simply walking contradictions of themselves.

They overthrow democratically elected governments on the basis that they are corrupt but only to turn round and perpetrate the worst form of corruption”.

In the second duel between two ‘Saint’, Louis and Jerome, still on the subject of governance, this time continental politics, was, “Africa Cannot Develop without a Continental Government.”

Saint Louis believes African countries rather need bilateral and multilateral trade, and not a unitary government to succeed, citing China as an example.

On the contrary, Saint Jerome asserted a common African government would have averted xenophobia and all the conflicts that have afflicted the continent.

Six points separated the two schools, with St Jerome picking the bigger chunk of 210 while St Louis SHS settled for 204.