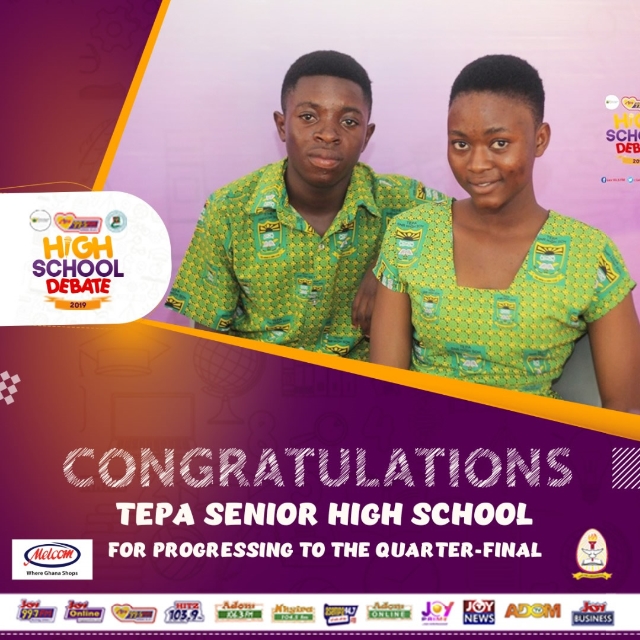 For the second time running, Tepa Senior High School has denied Prempeh College a place in the quarter-final stage of the Luv FM High School Debate.

In a re-enactment of the maiden edition clash between the two schools, Tepa SHS established superiority over Prempeh College by 217 points to 212.

The motion was: “Surge in Kidnapping: The result of failed security more than ignorance of personal security.”

The competition started with each school being fired up by their anthems, the songs filling up the auditorium of the Christian Service University College.

Right after that, Principal Speaker for Tepa Senior High School took to the podium to speak for the motion.

Sandra Narh led the onslaught in favour of the proposition.

“That with three Cabinet Ministers, Interior, Defence and National Security ministers and yet we are unable to check criminals. The security system has failed because the integrity of some of the key actors of the security systems are in doubt.”

Sandra continued that despite so much investment in the security services, integrity remain questionable.

Prempeh College’s Yaw Opoku Asiamah mounted a defence, arguing that a lack of credible information and public apathy to security is the cause of kidnapping.

“It is not entirely true that the security of the people depends entirely on the wisdom and integrity on the course of justice,” he said.

Speaking against the motion, was perhaps difficult for Prempeh College.

Tepa Senior High, in the end, had 217, while Prempeh fell five points behind.

The second contest saw Yaa Asantewaa SHS who would save the face of the ‘Aman-adehyeÉ› alliance’.

Speaking against the motion, “the Computerized School Selection and Placement must be scrapped,” they amassed 215 point ahead of Fomena T.I Amass’ 210.

“It shouldn’t be scrapped because the CSSPS has ensured equity in the placement system of the new education system. Every school has all categories of students.”

As Prempeh College brood over their defeat, Yaa Asantewaa Girls and Tepa SHS will prepare for the quarter-finals this week, as the competition gets keener and more interesting.