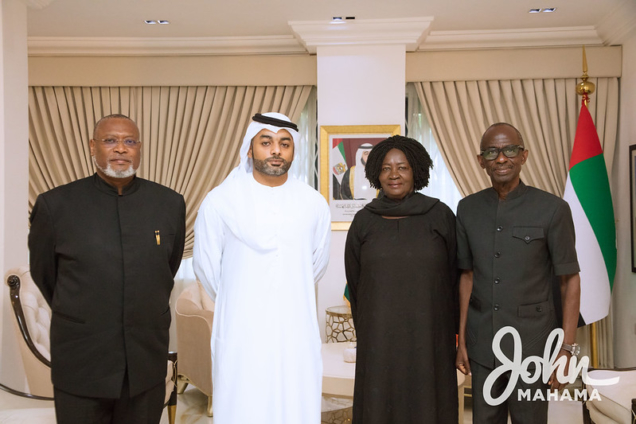 The General Secretary of the National Democratic Congress (NDC) Johnson Asiedu Nketia on Tuesday, May 17, joined Professor Naana Jane Opoku-Agyemang to sign a book of condolence for the late Sheikh Khalifa bin Zayed Al Nahyan, President of the United Arab Emirates and Ruler of Abu Dhabi.

Professor Opoku-Agyemang, signing the book of condolence on behalf of the former President said Mr Mahama “notes the inspiring legacy that His Highness has bequeathed to his people and the world”.

She added, “may the family, government, and people be comforted, and may Allah grant him eternal rest”.

On his part, Mr Asiedu Nketia wrote: “President Mahama and the entire NDC join our brothers and sisters of the UAE to mourn the demise of our great King. He has been a blessing, not only to the people of the UAE but, to humanity in general”.

Professor Opoku-Agyemang, who is the 2020 Vice Presidential candidate of the NDC, and a former Minister for Education was also accompanied by the Director of International Relations of the NDC, Alex Segbefia.

Sheikh Khalifa bin Zayed Al Nahyan died on May 13, and has since been buried in line with Islamic customs.