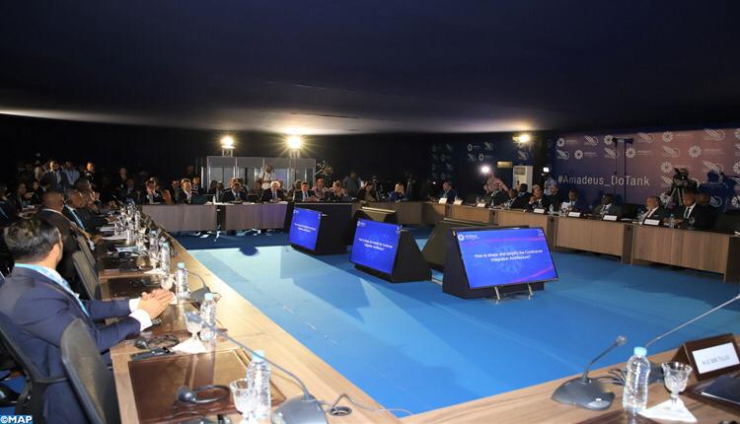 A growing list of countries has frequently renewed their support for the Autonomy Plan as a good basis to end the dispute over Western Sahara.

International experts stressed on Thursday in Tangier the pre-eminence of the Moroccan Autonomy Plan as a good basis to end the Western Sahara dispute.

The experts made their remarks during their participation at the MEDays forum.

Speaking at a panel entitled “Moroccan Sahara: Focus on recent dynamics,” Managing Partner at Mazars Audit & Conseil Abdou Diop explained that “the reality on the ground always prevails,” recalling the development projects that the southern provinces are experiencing.

This momentum is “carried by a royal vision and a strong commitment of the public and private sectors and a very important adhesion of the population,” he said.

Diop noted that the southern provinces rank first among Morocco’s regions in terms of GDP per capita, stressing that these provinces have become “a pilot region in energy transition… and a real hub for Africa.”

In this sense, the expert said that the African Union “can no longer afford to leave this subject on standby depending on the wishes of some and others,” noting that the artificial dispute over Western Sahara is “a crucial issue for the economic integration of the continent.”

President of the Institut de l’Emergence Mubarak Lo echoed Diop’s remarks, calling for the suspension of the self-proclaimed Sahrawi Arab Democratic Republic (SADR) from the AU.

The researcher also called on member states to amend the treaty of the continental organization, according to Article 32, to suspend this puppet entity.

Mubarak Lo said the inclusion of the self-proclaimed SADR in the AU was “a historical mistake,” noting that the current balance of power on the African continent is largely in Morocco’s favour.

“Today, the balance of power is clear, more than 70% of African states are in favour of the Moroccan position and the Autonomy Plan presented by Morocco,” he said.

He estimated that many other countries will soon align themselves with the position of the majority of the continent because the Moroccan Autonomy Plan is “the only viable solution” to end this dispute.

For his part, the President of the Institut Prospective et Securite en Europe (IPSE), Emmanuel Dupuy, pointed to Algeria’s direct involvement in the dispute.

“It is a question of survival for the Algerian regime which needs, among other things, to justify the increase in its defence budget,” he said.

He added that the Sahara issue should have been settled peacefully 40 years ago through diplomacy and democracy.

“The Sahara issue shows the great fragility of Algeria and its hyper-dependence on hydrocarbons,” he said.

He added that some European countries have “made a mistake to depend singularly” on exports of Algerian gas at the expense of a privileged relationship with Rabat.

The international expert in diplomacy and sovereignty, Amine Lahghidi, said that the UN Security Council resolution 2654 on the Sahara is “a recognition of the international community of the seriousness and credibility of the Moroccan Autonomy Plan.”

He noted that any solution to this dispute can only take place “under the sovereignty of Morocco and in full respect of the integrity of the Kingdom.”

The Moroccan autonomy initiative is “feasible,” he stressed, recalling the expertise of Morocco in advanced regionalization, especially in the southern provinces, which he called “champions of participatory democracy in the Kingdom with a very high rate of voter turnout”.

In addition, he added, Resolution 2654 has enshrined the roundtable process and reaffirmed “the full political, legal and moral responsibility of Algeria before history” in relation to the dispute over Western Sahara.

He stressed that the Security Council confirmed Algeria “as a party to the conflict in a very clear way.”

DISCLAIMER: The Views, Comments, Opinions, Contributions and Statements made by Readers and Contributors on this platform do not necessarily represent the views or policy of Multimedia Group Limited.
Tags:
King Mohammed VI
Morocco’s Autonomy Plan