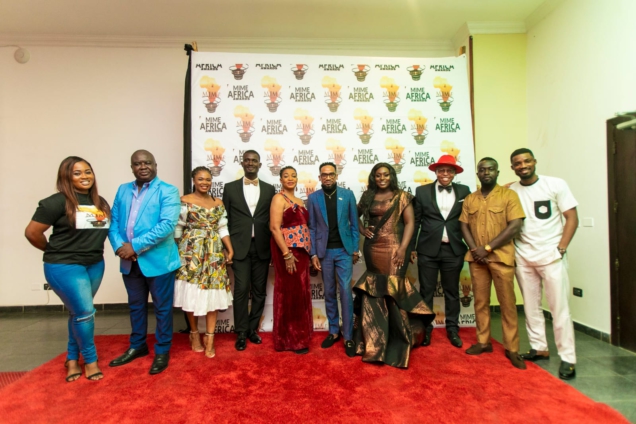 The maiden edition of the Merit in Movies and Entertainment Awards Africa, (Mime Africa Awards) has officially been launched at the Holiday Inn Hotel.

The event hosted by Hitz FM’s Doreen Avio and Kwesi Kwatia is with a focus on awarding today’s hottest & outstanding entertainment content and personalities, MIME is here to celebrate achievements in film, music, television, sports and general entertainment.

Speaking to CEO of the awards, Eunice Oheneba Asiedu expressed excitement as she explained that she has been wanting to put the awards together since 2019 but due to Covid 19 things got shaky and everything was put on hold.

She stressed that she is happy it has been officially launched and looking to do more work to make this a success.

Veteran actress and Producer Akorfa Ejeani commended organisers and added that awards schemes like the MIME Africa awards encourages the industry  to bring their A Game on.

“It will automatically help and make the industry better” she said.

Filmmaker Pascal Amanfo advised that the MIME Africa wards scheme should be encouraged as he believes that people who have found a way to keep the industry going should be given thumbs up.

He commended the likes Shirley Frimpong Manso, Peter Sedufia, Kobi Rana and others are working hard to release movies and hard times like Covid 19 and when things are tough for the industry,

Music Producer Fredyma on the other hand believes the awards will help the area of movies, sports, music, theatre and others which he said is very innovative. He added that it will bring people from different industries under one umbrella to network and do more.

CEO of the awards Eunice Oheneba Asiedu in her statement at the launch also announced that the engagement have started their activities this year.

“On behalf of our team,we are pleased to also announce that, the event marks the beginning of our “CALL TO ENTRY” in the awards across the various announced categories,” she said.

MIME will bring recognize and reward the best across Africa and will be used as a platform to raise the profile of African and international entertainers and content producers of African descent.