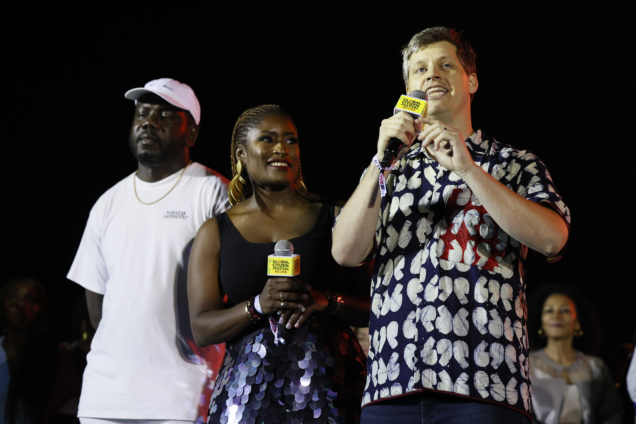 ACCRA, GHANA - SEPTEMBER 24: Kweku Mandela, Vice President of Global Policy, Liz Agbor-Tabi and Global Director of Policy and Advocacy, Michael Sheldrick are joined by other members of the crew on stage during Global Citizen Festival 2022: Accra on September 24, 2022 in Accra, Ghana. (Photo by Jemal Countess/Getty Images)

This past weekend saw the 10th anniversary of the Global Citizen Festival, and we could not have been more honoured and proud to host it at Accra’s iconic and prestigious Black Star Square and in New York City’s Central Park.

To the people of Ghana, we want to express our sincere gratitude. Thank you for being so welcoming and for embracing the Global Citizen movement with utmost vigor and enthusiasm. Thank you for taking action. Thank you for sharing your national story with us and indeed the world.

During our time in Accra, we were asked multiple times why we chose Ghana. The truth is Ghana chose Global Citizen! As is written on the Independence Arch, Ghana’s national story symbolizes “freedom” and “justice.” Such a story prevails as an inspiration not only to Ghanaians, and to Africa as a whole, but indeed the world.

At a time when global solidarity is needed more than ever, Ghana’s history and heritage serve not only as a beacon of progress but also as a call to action to continue in the pursuit for freedom, justice and the achievement of the UN’s Sustainable Development Goals (SDGs); an agenda of which, His Excellency, President Akufo-Addo has been one of the staunchest champions.

While in Ghana, we also learned about the West African concept of ‘Sankofa,’ which means one should remember the past to make positive progress in the future. Such a learning could not be more relevant to Global Citizen’s campaign to end extreme poverty, and to do so NOW!

Ghana celebrates 65 years of independence this year. Persistent hallmarks of colonialism remain in one form or another that keep millions of people around the world trapped in a cycle of poverty.

Industrialized countries have spent two centuries growing their economy off the back of fossil fuels, resulting in the damaging changes to the climate that we are seeing now.

Africa, although accounting for just 3-4% of global emissions, is on the frontlines of climate-induced droughts and floods. Now just as African governments and leaders show their willingness to step up, promises from the G20 to provide $100 billion annually in climate finance continue to prove hollow.

Similarly, one in five countries are now experiencing fiscal and financial stress as a result of the structural inequities of the global financial system.

Unaddressed, there will be deepening hardship, debt defaults, widening inequality, political upheaval and a delayed shift to a low-carbon world.

Yet, global leaders have grown as adept at rescuing banks just as they are bad at saving countries from rising poverty, climate change and a meltdown in food systems. It is against this backdrop, with world leaders gathering at the UN in New York, that thousands of global citizens gathered together in Accra.

Featuring an incredible lineup of international and local artists and musicians, watched live in front of an audience of 20,000, plus thousands more tuning in from home, last Saturday’s Global Citizen Festival, issued a clarion call for global solidarity and justice.

There could not have been a location more suited to this than the Black Star Square where advocates called for the architecture of the world’s financial system to be changed and for the International Monetary Fund’s shareholders to urgently scale up financial resources and stop the debt crisis in its tracks.

Now is the time for action to build a level playing field and to commit to fair and equitable inclusion at all levels of society.

To the sounds of Stormzy, Stonebwoy, Usher, Tems, many leaders heard this call and the Global Citizen campaign culminated in $2.4 billion – 24.6 billion – being committed to help end extreme poverty. Of this funding, more than $440 million was earmarked exclusively to initiatives to end extreme poverty on the African continent, with the remainder intended to reach people around the world, including across Africa.

Of course, much more is required and that is why action taking, and using our voice, must be a 365-day-a-year activity. Only through sustained engagement will we see leaders respond to our call and do what is needed to lay the path toward a new international system that drives financial resources towards climate action and the SDGs.

The good news is that, through this campaign, Ghanianians set a powerful example and benchmark for taking action and of what it means to be a global citizen.

Over a quarter of a million actions were taken by Ghanians as part of the campaign. This included hundreds of Ghanaian youth taking to the beaches to clean up and sort trash, in support of the vital work of organizations like BASICS International, Plastic Punch and Green Africa Youth Organisation (GAYO).

Some joined organizations like Power to Girls Foundation to raise awareness in various high schools about mental health, menstrual hygiene and safe spaces for girls. Hundreds of Rotarians planted trees and came by the bus load to attend the Festival. And thousands more took action on the Global Citizen platform to earn festival tickets.

We invite you all to continue to partner with us and to stay engaged as we work together for a new kind of global solidarity focused on empowering women and girls, supporting smallholder farmers, curbing the global hunger crisis, strengthening health systems, providing urgent relief from debts unjustly crushing economies, and defending advocacy and civic space.

For our part, we will certainly never forget the message Ghana sent so clearly to the world at last Saturday’s historic Global Citizen Festival in Accra.

You showed so powerfully that Africa has so much to offer and build towards. And you showed us all what active global citizenship looks like. It has left us feeling quite simply, humbled, grateful and inspired.

DISCLAIMER: The Views, Comments, Opinions, Contributions and Statements made by Readers and Contributors on this platform do not necessarily represent the views or policy of Multimedia Group Limited.
Tags:
Global Citizen festival