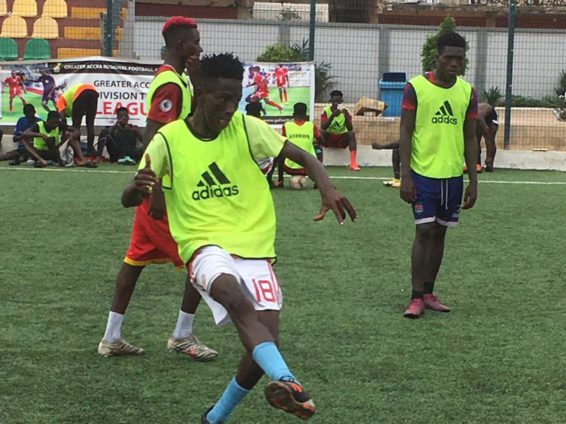 Asante, who was not fully fit at the time of the game couldn’t start and found himself on the bench.

The introduction of the 15-year-old attacking midfielder gave Golden Kicks the edge they needed, as they trailed Mobile Phone People FC late into the decider. Mizak provided the answer when he wriggled past four defenders in the penalty box, outsmarted the goalkeeper by rounding him up and lifted the ball into the roof of the net, in the tightest of spaces to pull his side level.

His goal forced a penalty shootout which went in his team’s favour.

Explaining how the goal came about to Joy Sports’ George Addo Jnr, Mizak said he wasn’t carried away by the goal, because it was routine for fans who had watched him all season.

“If you watch the goal closely, you’ll realize that the when the ball first came to my left, the player I dribbled first pulled himself away from the challenge because he wanted to avoid the penalty. We already had one penalty we missed and they didn’t want to concede another.

“When I watch the video, I realized that the guy on my left pulled himself away. But the guy who came in for the second tackle guessed that I’ll be taking the ball back to my right, and since I had the idea he’ll take that guess, I didn’t

“I will thank Allotei, my team mate who was on my right because after I had meandered my way through and was one-on-one with the keeper, he [Allotei] shouted out to me. Because of that, the keeper thought I was in a very tight angle, so he [the keeper] decided to cover the passing angle to Allotei so I decided to hold on to the ball and keep moving towards goal. That was why the keeper fell,” he said in an interview.

Asante added that, inspiration from France and PSG Star, Kylian Mbappe is what has kept him going and he is hopeful of becoming better.

“Oh I watch a lot of players but the one I like very much is Kylian Mbappe. I like how direct he is with the ball and his pace as well. It’s Kylian Mbappe I really want to play like,” he noted.

Young players like Steadfast Fc’s Fatawu Issahaku have received Black Stars call-ups lately, and with the reappointment of Milovan Rajevac – a man who invests in youth – as head coach, Asante says a call up to the national team will be a dream come true.

“I will be very happy with a call from the Black Stars. It is one of my biggest targets. I pray towards it, it is a dream of mine,” he said.

Asante is on the verge of receiving a call up to the national u17 team after head Karim Zito spoke highly of him. Golden Kicks will compete in Zone III of the Division One League next season.

DISCLAIMER: The Views, Comments, Opinions, Contributions and Statements made by Readers and Contributors on this platform do not necessarily represent the views or policy of Multimedia Group Limited.
Tags:
Division One League
Golden Kicks
Mizak Asante