More farmers in Libya are abandoning their farms amid scarce water resources - MyJoyOnline.com 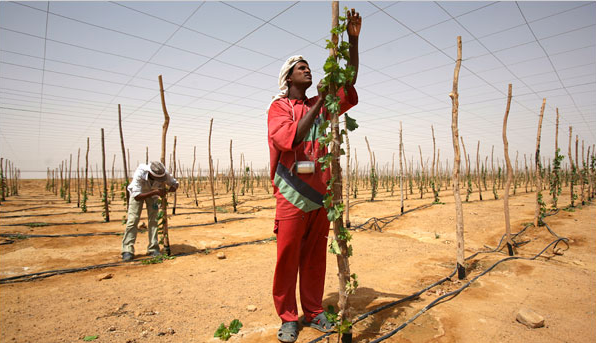 More farmers in the protracted conflict zone Libya are abandoning their farms amid a scarcity of water resources, while rainfed agricultural yields are severely low as a result of droughts.

In southwestern Tripoli, agriculture is the main source of income for a majority of the population, but the violence has forced many local farmers to abandon their land and homes in search of safety in other regions.

Report from the International Committee of the Red Cross (ICRC) said, some farmers had returned to the area only to discover that their lands were dried up while vital infrastructure was damaged by the conflict.

A returnee farmer from Awiniya, Ali laments over the lost.

“I can do nothing, I lost everything and had to start again from zero. I started planting trees again as if I was in my first year of farming, but with three consecutive years of drought, the trees didn`t grow and blossom due to the severe weather,” he said

According to the ICRC, climate change presents the country with extreme weather events such as sand and dust storms, droughts and higher temperatures.

The ICRC said the impact of years of renewed conflict has affected the country’s resilience as the resources required to mitigate climate risks are reallocated to meet the short- and long-term consequences of the protracted conflict.

The conflict in Libya has left the country extremely vulnerable to climate variability and threatened to increase the impacts on agricultural production and livelihoods of thousands of people.

Libya experienced a significant decrease in precipitation from October 2020 to October 2021. The few wet days of this period resulted in only ponds of water that evaporate quickly without penetrating the soil. The irregular intensity of precipitation often causes occasional floods that severely damage the soil, affect agricultural production and cause economic losses.

ICRC said the damage has increased in some areas where drainage infrastructure is already damaged by the conflict.

Jalal Al-Qadi of the Misrata Agricultural Research Centre said there is an urgent need to invest more resources into arable land to mitigate the climate impact.

“We can see the shock in olive oil prices, for instance, that tripled over the last two years due to reduced production impacted by decrease in rainfall.”

A study by Climate Security Expert Network stated that the Libyan government found bigger sources of water in southern deep fossil aquifers. To harness this resource, a colossal pumping system called the Man Made River (MMR) was built to lift fresh water 500 metres underground and transport it hundreds of kilometres to the population of the coast.

But repeated attacks on the Man-Made River, which supplies 60 per cent of all the freshwater used in Libya, threaten the country’s water security.

The Wadi Kaam dam, which once contained about 33 million cubic metres of water, has completely dried up due to climate change.