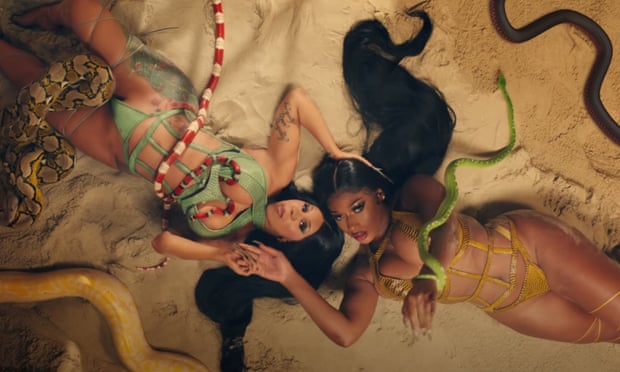 Cardi B and Megan Thee Stallion in the video for WAP, which caused a 201% rise in searches for animal print clothing.

Pop promo looks from BTS, Beyonce and others are driving designer sales through increased screen time.

As fashion shows have ground to a halt due to international Covid restrictions, the catwalk has shifted on to a new platform: music videos.

Last week, the rapper Drake released his clothing collaboration with Nike, but key items from the Certified Lover Boy collection, including a much-coveted quilted pink bomber jacket, were previewed in his Laugh Now Cry Later video.

According to Carvalho, the influence of the pop promo on the catwalk is nothing new, from Run-DMC’s chunky chains to Nirvana’s grungy plaid shirts. But in 2020, a shift has taken place.

“It’s less subversive than it was. When R&B and hip-hop acts wore clothing [in music videos] in the 90s, it was a statement of the style that they wanted to profess. Now it is brand alignment, and all brands are looking to align with strong celebrity and music acts.”

Music videos have also filled a void. “[They] have replicated the sense of escapism associated with fashion week,” says Katherine Bailey, a retail analyst at Edited.

“[They’ve] repurposed key elements, including the theatre and production, celebrity status and aspirational clothing.” Another factor is a growing appetite for new things to watch as people stay at home more.

“With 2020 spent mainly indoors, screen time has become the only thing connecting us to the outside world,” says Morgane Le Caer, data editor at Lyst.

Standout items of clothing from this year’s biggest pop videos – which, on average, have viewing figures in their hundred of millions – have instantly become in demand online.

Similarly, after Harry Styles’s Watermelon Sugar video first streamed, searches for the floral, semi-sheer shirt from Bode he wears in it increased by 31%, while the video for Dynamite by BTS was directly linked to an increase in searches for bucket hats (128%, according to Lyst).

“Many fans are looking for products that truly reflect their favourite artist’s personal style,” says Le Caer, “be it a standalone label, a collaboration with a well-known brand, or a simple product endorsement.”

It can also be gamechanging for individual labels. When Beyoncé and her dancers wore Marine Serre’s crescent moon bodysuit in Black Is King, searches for Serre increased by 51%.

The designer told the Guardian Beyoncé’s film was “amazing, and the dancing was amazing … it fits with the message I want to spread.”

Indeed, for fashion designers the medium has a broad appeal. Nicola Formichetti, who has worked closely with Lady Gaga on many of her music videos, including Bad Romance and the recent Rain on Me, says: “With a music video, there is a narrative in place, which gives the fashion a life.

It is much more effective and interesting to showcase the fashion through a story to me. Almost like watching a short film rather than watching a catwalk.”

DISCLAIMER: The Views, Comments, Opinions, Contributions and Statements made by Readers and Contributors on this platform do not necessarily represent the views or policy of Multimedia Group Limited.
Tags:
Beyonce
Covid-19
Fashion
music videos