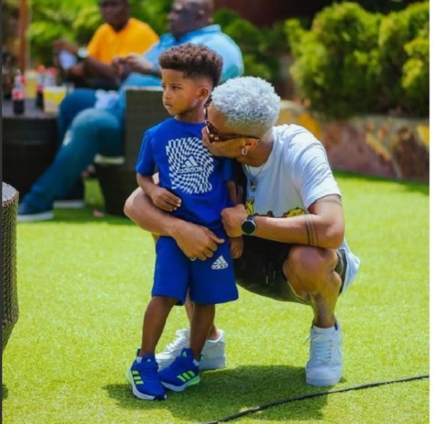 In an interview with Andy Dosty on Daybreak Hitz, the reigning VGMA Artiste of the Year revealed that even though he tries to do clean music that can be consumed by people of all ages, his son happens to like his ‘dirty songs’.

According to KiDi, he lets it pass because his son does not understand the lyrics of these songs.

“I have a job as a parent to navigate what he listens to.”

“He likes them. I think he does not grasp what I am saying. His favorite song is the dirtiest song I have heard in my life.”

The Odo hitmaker admits that his son has to be checked, but also says that he is trying his best not to clip his wing as well as stop him from having fun.

“His favorite song is Chris Brown’s Go Crazy. Anytime he picks up the remote he wants to go to YouTube just to watch the video.

“I sometimes feel some way, but I also don’t want to clip his wings. At that age, I think he is enjoying himself,” he said on Hitz FM.

KiDi also shared his challenge as a father, admitting it is difficult.

He also stated that he is doing his best to learn how to take care of his son.

“There is no rule book on how to do this, but sometimes you have to figure out how to do this day by day. He does not know what he is listening to. He only enjoys the melodies so I allow him,” he concluded.

DISCLAIMER: The Views, Comments, Opinions, Contributions and Statements made by Readers and Contributors on this platform do not necessarily represent the views or policy of Multimedia Group Limited.
Tags:
KiDi
KiDi and son
Zane