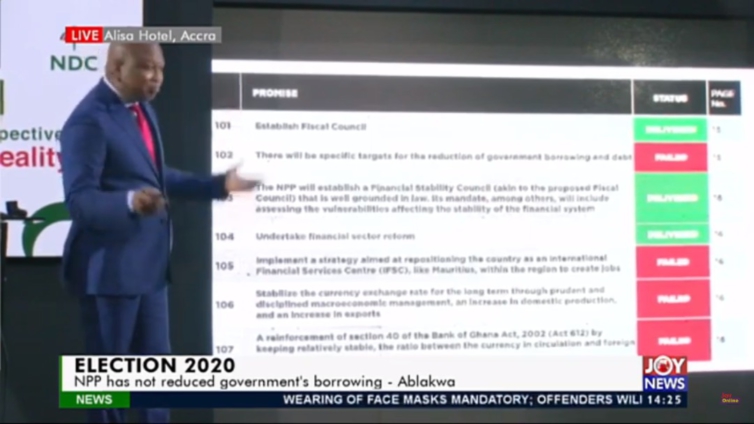 The opposition National Democratic Congress (NDC) has scored the Akufo-Addo administration 14 percent on the fulfillment of its 2016 campaign promises.

Presenting a detailed assessment of promises made by the ruling New Patriotic Party (NPP) a press briefing Monday, North Tongu MP, Samuel Okudzeto Ablakwa said only 86 out of the 631 campaign promises made have been delivered.

“You made tonnes of promises in your manifesto you are not delivering and you’ve even tried to conceal a lot of them and you come to power and you sre still make more of them.

“The thing is, when you come to power, you focus on delivering what you have promised not to be making more promises,” he stressed.

Mr Okudzeto Ablakwa further highlighted that, the assessment therefore, contradicts an earlier claim of the Vice President, Dr Mahamudu Bawumia that government has achieved 78% of what it promised four years ago.

For him, the claim of Dr Bawumia is a scam and only a political tactic to deceive Ghanaians.

“When Dr Bawumia presented the Akufo-Addo administration’s account of their implementation, he listed 388 promises. [Even] IMANI, an independent group, had listed far more. We as a party have combed through their manifesto and presented to you 631.

“Every single promise had its page number announced as well. We have outlined a status report of every one of them and analysed the delivering and the delivered so that there will be no distortion,” he stated.

But, responding to these claims, the Information Minister, Kojo Oppong Nkrumah said opposition NDC has no moral right to criticize government in terms of fulfilled promises.

According to him, 67 percent of promises made by NDC in 2008 were not fulfilled in the first tenure in office.

“If you take away the screens and the flashes amongst others, in substances it is nothing different from what we have observed in time passed.

“We will be looking forward to that detailed list of promises, and as we have done in Agric we will seek to expose the intellectual dishonesty that they have tried to put the people of Ghana through,” he was categorical.

“We are of a firm believe, that if anybody wants to push a conversation of the fulfillment of a social contract, this group [NDC] as today seeks to distort our record must be exposed for who they are so that we all know that they are not the apostles on this matter,” he emphasised.

The information Minister then stated that the government is willing to engage stakeholders to find constructive means to steadily achieve its developmental goals.