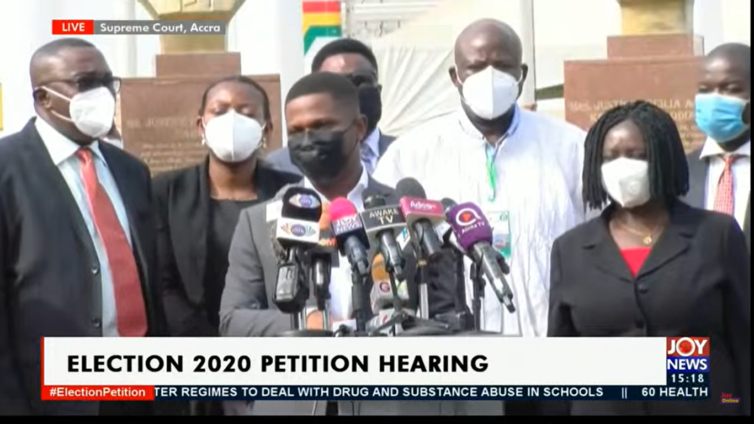 The opposition National Democratic Congress (NDC) says it will explore other avenues to hold the Electoral Commission’s Chairperson, Jean Mensa accountable for the anomalies detected in the 2020 presidential election.

This follows a unanimous decision by a nine-member panel of Supreme Court Judges affirming a seven-member panel ruling that stopped John Mahama from reopening his election petition case.

Dismissing the review application, Chief Justice Kwasi Anin Yeboah maintained the earlier ruling that the petitioner has not indicated how the evidence he intends to solicit from the EC Chairperson will help to determine the case.

He stated that the arguments raised by the counsel for the petitioner are the same as those raised when he asked to reopen his case and subpoena the EC Chairperson.

Adding that a review jurisdiction should not be seen and used as an emotional reaction to an unfavorable judgment.

But addressing the media after Monday’s proceedings, the NDC’s Communications Officer, Sammy Gyamfi said although the judgement is disappointing, the party will find other means to make the EC accountable.

He insisted that the inconsistencies that have been detected by the NDC led by John Dramani Mahama must be clarified by the EC and if they will not get that at the Apex Court, then alternatives modus would be implemented.

“Knowing the principles of law and statues that our Parliament has passed that the Court has previously applied are not being applied in this case so in our opinion we are not being treated fairly and we are disappointed but the decision of the court is what prevails.

“And it is an emphatic yes. to the question if we are going to explore other alternatives and avenues. We mean it when we say we are going to fight this matter to its logical conclusion,” Mr Gyamfi noted.

But reacting to this, the Spokesperson of the 2nd respondent in the election petition, Kojo Oppong Nkrumah described as interesting the NDC’s decision to explore other options.

According to him, the counsel of President Akufo-Addo has consistently suggested to the petitioner, Mr Mahama other alternatives if accountability from the EC boss is what he wants

“We have been arguing that if you [petitioner] want accountability generally, you can come to Parliament, the Parliamentary Committee of Enquiry that can look into whatever matter that you bring, you can come under the Right to Information Act, asking for a particular information .

“So it is interesting that at the end of the case when we are all wondering where the evidence that they were supposed to provide to you is, they are now opening up to you that they are willing to consider other avenues,” he said.

Meanwhile, the Court has set Thursday, March 4, 2021, as the day of judgement.