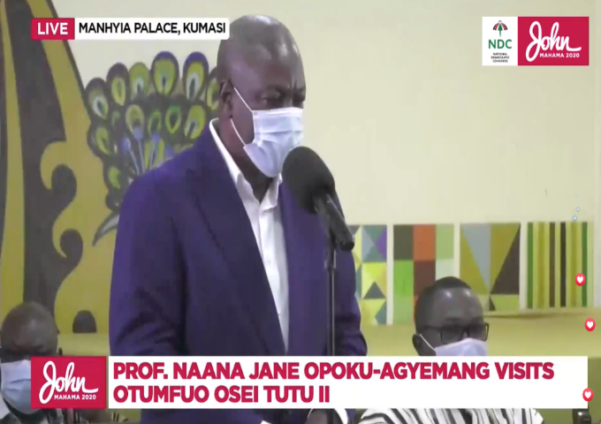 Former President John Mahama says an investment of $10 billion will be made into infrastructure when given the nod for a second term.

The fund he calls ‘The Big Push’ will go into roads, schools and all necessary projects especially ventures that will expand the local economy.

The NDC flagbearer made the promise at the Manhyia Palace where he introduced his running mate Prof. Naana Jane Opoku-Agyemang to the Asantehene, Otumfuo Osei Tutu II, Wednesday.

Mr Mahama, who is unhappy with the delay in completion of some projects he commenced in the Ashanti Region, said under when voted into power, he will change the status quo.

Boankra inland port, dualisation of the Kumasi-Accra road, the Eastern Corridor roads and railways to bauxite mining areas are few of the projects he listed to be undertaken with the fund.

But said the $2 billion to be invested annually will drive the ailing economy.

Under this program, all legal owners of mining concessions will be given back their concessions whiles cooperative mining takes effect.

Running mate, Prof. Opoku Agyemang after being introduced to the Asantehene sought for his blessings and acceptance.

Otumfuo Osei Tutu the second responding to the earlier address want the Former President to do a proper introspection and  correct all wrongs in his first time as President.

He also called for peaceful campaign and voting.