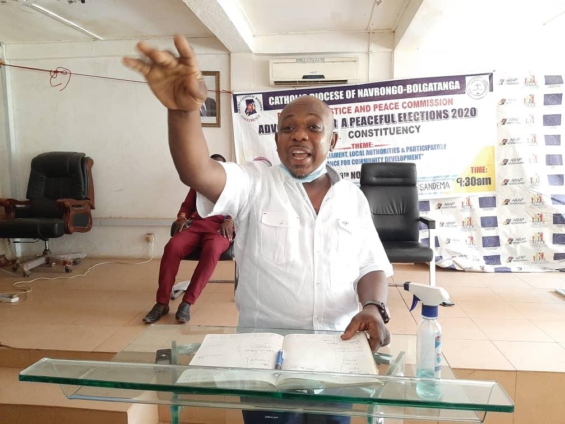 The Parliamentary Candidate for the National Democratic Congress (NDC) in the Builsa North Constituency of the Upper East Region says the next NDC government will reintroduce police visibility across the country to minimise crime rate.

James Agalga said statistics from the Ghana Police Service indicated that “Crime rates are on the increase, we have a 27 percent increase in major crimes in the country. There is no denying the fact that there is a state of insecurity in the country which needs to be resolved as quickly as possible.”

Mr Agalga said this when he took his turn to answer a question at a debate programme on plans aspiring legislators contesting the Builsa North seat have to improve the security situation in there.

The debate was organised by the Justice and Peace Commission of the Christ the King Catholic Church at Sandema, in the Builsa North District in collaboration with the National Commission for Civic Education (NCCE).

The programme was on the theme: “The role of Parliament, local authorities and participatory governance for community development,” with support from the European Union and the Konrad Adenuer Stiffing, a German Non-Governmental Organisation.

According to Mr Agalga, “Previously, Police visibility was part of our national policy. So we rolled that policy out and Police could be seen everywhere. Now Police visibility has been rolled back. It is a fact.

“When the NDC wins and I become Member of Parliament, that is my domain, we are going to bring back police visibility across the country and our District will not be left out. You will begin to see the Police everywhere.”

The PC who is the incumbent Member of Parliament for the area and the Ranking Member of the Defence and Interior Committee of Parliament, noted that “When criminals see the Police dotted all over the place, they are deterred.”

He said “When we rolled out visibility, we brought down crime by about 16 percent at the time under the watch of Inspector General of Police, Mr Mohammed Alhassan. We shall reintroduce the Police visibility concept.”

Mr Agalga said it was critical to retool the Ghana Police Service to enhance effective visibility, especially in the Builsa North Constituency.

“As we speak, the Police Command in Sandema has only one operational vehicle. We used to have three, so we need to give them more vehicles so that their mobility can be enhanced.”

He said motivation for security service personnel was low, adding that Police and Fire Service personnel were threatened with their Cap 30, “So they are not ready to die for you and me. That is the plain truth. When we come to office, we shall amend the Labour Act 2008 to ensure that all the security agencies are firmly rooted in the Cap 30 pension scheme.”

The programme saw Mr Simon Gibson Achavuusum Anuegabey, an Independent Candidate, Mr Joseph Ransford Asuok, the Peoples National Convention (PNC) candidate answer questions on how they intended to improve unemployment, health, security and education sectors when given the nod to represent the people in Parliament.

The Builsa North District Director of the NCCE, Mr Jeffery Adda, in his address, said the programme was intended to create a platform for the electorates and the PCs to interact, and afford the Candidates the opportunity to inform their electorates on their policies and programmes.

He said the programme further enabled the Candidates to pledge towards peace in the December 7 Presidential and Parliamentary elections.