NDC’s worst defeat is not yet here, we will deliver that in 2024 elections – John Boadu 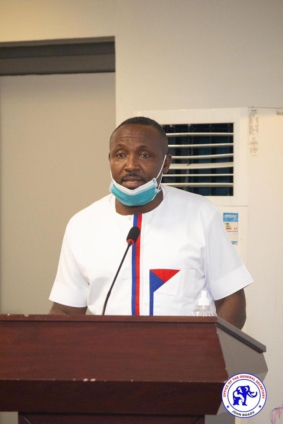 The General Secretary for the New Patriotic Party (NPP), John Boadu says the opposition National Democratic Congress (NDC) has not seen its worst defeat despite its loss in both the 2020 general elections and election petition trial.

“For us, it is a vindication of the confidence that the people of this country repose once again in the New Patriotic Party. Their worst defeat is not yet in. We are going to deliver that defeat in 2024 and send them to their right places,” he said.

Speaking to the press Thursday, after the Justices of the Supreme Court dismissed the election filed by former President John Mahama, John Boadu said the petitioner failed to demonstrate the claims he presented to the apex court.

According to him, John Mahama could not prove that the 2nd respondent, President Akufo-Addo did not garner 50 per cent plus 1 vote despite the promised witnesses he presented to be cross-examined.

JoyNews/AdomNews · NDC’s worst defeat is not yet here, we will deliver that in 2024 elections – John Boadu

Mr Boadu further stated that the statements presented by the 3 witnesses: NDC’s General Secretary Asiedu Nketiah, Kpessa Whyte and Rojo Mettle-Nunoo did not hold water, and as such led to the dismissal of the petition.

He added that Mr Mettle-Nunoo’s accusation that the EC told him to leave the strongroom was simply unacceptable.

He said: “Everybody knows and it is basic for any political party’s training of agents to let agents understand that until the signed copy of the documents for which you were sent there has been given to you, you don’t leave the area, more so where opportunities were created for you to have a backup.

“So it is more or less Kwaku Anansesem for somebody of such calibre to say that he was tricked by the Electoral Commissioner to go and deliver a message.

“For the so-called star witness, he (Asiedu Nketia) made our case for us. Through the cross-examination, he accepted that Nana Addo Danquah Akufo-Addo, whether Techiman South votes were given to them or the valid votes gotten by each candidate were correctly given to them, Nana Addo Danquah Akufo-Addo got not only more than 50 per cent, got 51 per cent plus in the elections.”

The Supreme Court today indicated that the petition filed by John Mahama to contest the 2020 Presidential election results declared on December 9, by the Chair of the Electoral Commission, Jean Mensa lacked merit.

Therefore, the judges of the Supreme Court dismissed the case presented before it.

Meanwhile, Mr John Boadu is urging all Ghanaians to support the governing party led by President Akufo-Addo for a smooth running of affairs in the next four years.

Some supporters of the NPP together with executives of the party have expressed content and joy in the decision made by the apex court today.