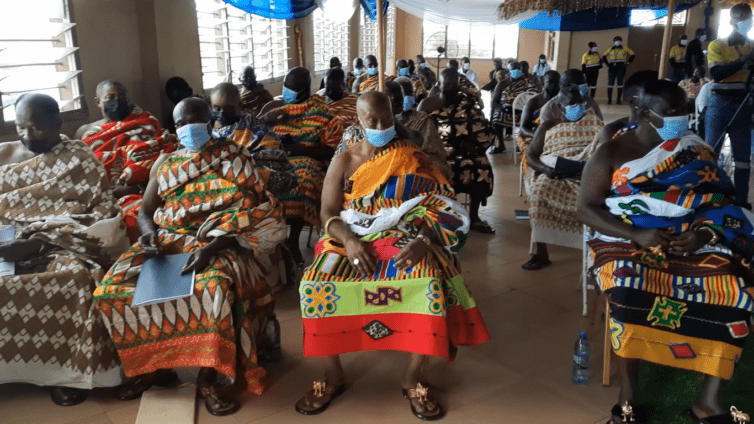 Chiefs from the Ahafo Mine host communities

The vice president, Sustainability and External Relations of Newmont Ghana Gold Mines, Adiki Ayitivie says the Ahafo Mines will be working to explore viable economic opportunities in the coming years, intending to generate more employment for the community members.

Speaking at the signing of the revised Ahafo Social Responsibility Agreements, she stressed the need for stakeholders to adopt a new approach to solve the problems of the Ahafo community.

The Agreement, first signed in 2008 through the work of the Ahafo Social Responsibility Forum, covered three thematic areas – Employment, which spells out guidelines for employing locals within the host communities, Foundation, which sets out the terms and conditions under which Newmont Ghana (Ahafo Mine) shall fund the operations of Newmont Ahafo Development Foundation (NADEF), and Relationship, which sets out the understanding reached between the company and the community to advance the sustainable and economic development of the communities.

Obligations under the agreement continue to be funded with a contribution of US$1 per ounce of gold sold and 1 percent of the company’s net profit.

This, according to the General Manager of the Ahafo Mine, Okyere Ntrama, runs into US$34.1 Million (106.6M GHS) so far, out of which many developmental projects have been executed to the benefit of the people in Ahafo.

But a reviewed agreement, after much deliberations, was signed on November 22, 2021, at the Ntortroso College of Nursing, between Newmont Ghana, and the host community chiefs and youth leadership, and Directors of NADEF.

It was witnessed by the Ahafo Regional Minister, George Yaw Boakye, District Chief Executives, Senior staff of the Ahafo Mine, and other stakeholders.

Kenyasi No1 chief, Nana Osei Kofi Abiri l, speaking on behalf of the host community chiefs, said their desire for an increment could not go through for now, except an annual payment of US$300,000 the company offered them for a cross-community project which could focus on sustainable job creation.

“We have agreed to this with our youths for now because we want development. But we will return after 5 years to insist on an upward adjustment of our benefits from the company”, he stated.

The Vice President, Sustainability and External Relations of Newmont Ghana, Adiki Ayitivie, said after the achievements in the past 13 years, “It is time to build a new Ahafo that reflects the twentieth century and provides more hope for young people within our host communities”.

She said this will require “the need to do things differently to address the increasing unemployment challenges and stakeholder desire for modern infrastructure in our towns and villages”, explaining her excitement about the provisions in the new Agreement.

Ms. Ayitivie revealed that “through our employment agreement, we are working towards improving our previous commitment of 35% local-local employment by Newmont and its contractors to 40% and progressively improving to 53% by the next Agreement revision”.

Despite what she described as a significant step to increase the number of local-local employees at the mines, she added that there is still the need to look at alternative employment opportunities because direct opportunities at Newmont are finite and cannot meet all the demands.

“Over the next couple of years, we will be working with consultants and other social investors to explore viable economic opportunities that will generate more employment for community members”, Ms. Ayitivie said.

As they move into the implementation phase of the new agreement, she urged members of the Ahafo Social Responsibility Forum to join hands so that together, they can make the Ahafo aspirations a reality.

Meanwhile, Abdul Karim Yeboah, the youth leader for Kenyasi No1, said they are not entirely happy with the content of the agreement, especially with the profit margins that come to the communities.

“That is why we held on to the signing but, we could also not keep it like that, so we had to allow the process to continue. We hope that subsequent agreements would be far better than this one so that our people would get jobs and live decent lives”, he said.

DISCLAIMER: The Views, Comments, Opinions, Contributions and Statements made by Readers and Contributors on this platform do not necessarily represent the views or policy of Multimedia Group Limited.
Tags:
Ahafo community
economic opportunities
Newmont Ghana