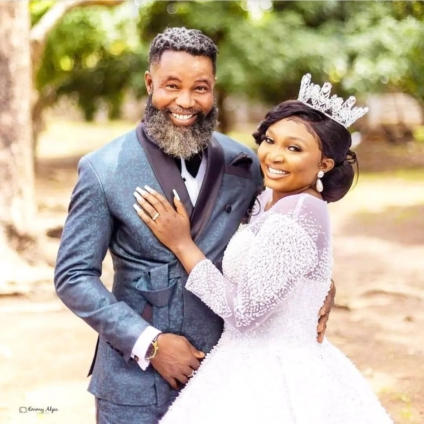 Nigerian Comedian, Osama Akpunonu, has announced the death of his wife Mildred Maurice.

Comedian Osama shared the sad news with his friends and followers on Instagram on Monday, March 28, 2022.

He, however, did not disclose the details of her death.

The comedian revealed his wife passed barely a year into their marriage with their first anniversary two moths away.

In his post, Comedian Osama mourned his wife and prayed for her soul.

“Wedding That Never Saw Any Anniversary Got Married 15th May 2021…She Died on 26th March 2022…God Bless Your Soul My World  #NaMyData,” he wrote.

In a post, the comedian shared a video collage of pictures of his wife with the caption “RIP” and a broken heart emoji.

Osama is a Jos-based comedian who has gained fame in the entertainment industry.

The Edo born entertainer has worked with several top comedians including AY, Basket Mouth, Nedu Wazobia, Julius Agwu, among others.

He has his own comedy show titled ‘Rhythm of Laughter’.