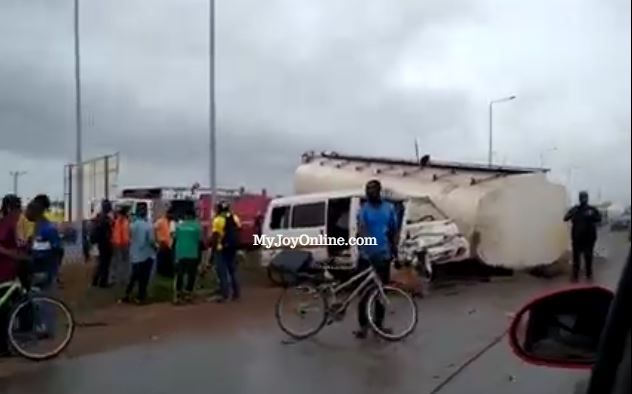 Scene of the accident

Persons who witnessed Friday morning’s accident on the Accra-Tema motorway, which claimed one life and left several others injured, have blamed the absence of emergency response at the scene, for the death.

The accident occurred around 5:30 am when a Tema-bound fuel tanker tripped and veered into the Accra-bound lane of the motorway.

The head of the tanker somersaulted while its bulk crashed into two oncoming vehicles.

The two other cars were passenger vehicles that were heading to Accra from the Volta Region and Dawhenya.

The eyewitnesses said the tanker driver lost control while attempting to dodge a vehicle that had suddenly exited the motorway, a few meters from the Ashaiman overhead bridge.

For more than two hours as rescue efforts were made by other road users, emergency response was absent.

Some eyewitnesses elected to rescue the victims and pull them out while waiting for help. But help did not come.

It took the benevolence of a Toyota V8 driver to transport the wailing victims to the Tema General Hospital, where they are currently receiving treatment.

The driver of the Sprinter bus, one of the vehicles involved in the accident, narrated that, “I loaded my car from Dawhenya. When I got to the motorway, I observed that the trailer was behaving in an unusual way.

“I immediately decided to swerve. Before I could even finish, the bulk of the vehicle was in my lane. It missed me narrowly, but the ones behind me couldn’t be spared.”

Another man, Emmanuel Amoah, who led the rescue efforts at the scene, said, “I was the first person to arrive here when it happened. We called the ambulance and fire service several times, but they never showed up.

“Even up until now, they haven’t shown up. If they came when we called, I’m not sure he would have died.”

Meanwhile, seven people were rushed to the Tema General Hospital, with three of them having varying degrees of injury. Sources within the Tema Police said one person has been arrested to assist with police investigations.

DISCLAIMER: The Views, Comments, Opinions, Contributions and Statements made by Readers and Contributors on this platform do not necessarily represent the views or policy of Multimedia Group Limited.
Tags:
Accra-Tema motorway
Tema Motorway accident