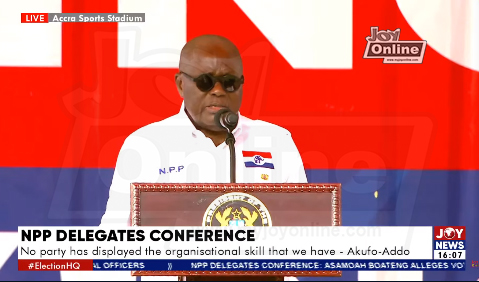 President Akufo-Addo says the New Patriotic Party (NPP) has a tradition of reviving Ghana’s economy whenever it is under distress.

The President noted that during the John Agyekum Kufuor administration, the NPP took the country out of HIPC and a “derailed IMF deal in 2015 under John Mahama.”

Speaking at the party’s National Delegates Conference in Accra, on Saturday, President Akufo-Addo said the NPP “has done it before [fixed the economy] and believe me, we are going to do it again.”

“We came to office under a derailed IMF programme which we inherited from the Mahama administration. We worked hard to exit the country from the programme and we were in the process of building a strong economy until the events of Covid and its consequences,” he said.

He assured Ghanaians that his government “will negotiate a good IMF deal” to revive the country’s economy.

“In so doing the strong economy that we are going to build is an economy that will provide a platform for our victory in 2024. It is our historic duty to maintain the NPP in office under a new candidate and leader but with the same commitment,” he noted.

Government has completed a week meeting with officials from the IMF and hoping for economic support following President Akufo-Addo’s directive for the Finance Minister to engage the Fund for a programme.

Meanwhile, the International Monetary Fund (IMF) has assured Ghana that it will move fast and do much as it can to support the country to come out of the prevailing economic challenge.

In a press briefing ahead of the G20 Meeting, the Fund said it supported Ghana before and during the Covid-19 pandemic and will continue to do same.