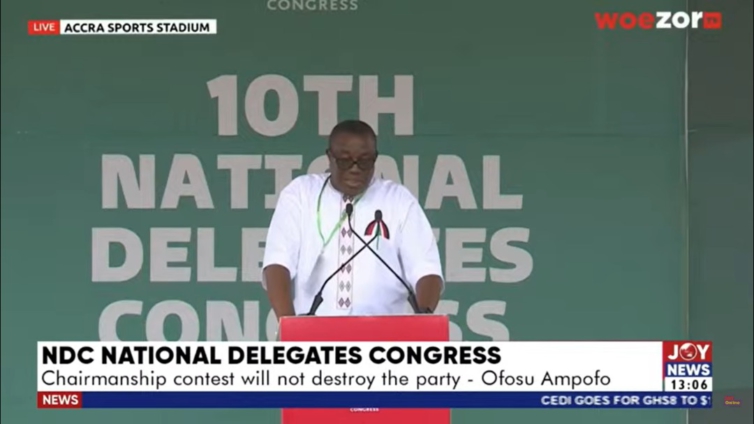 In a press release issued on Monday, he wished them well as their tenure commences.

“On behalf of Team Ofosu-Ampofo, I wish to congratulate the newly elected National Chairman and other National Executives of our dear party, the National Democratic Congress (NDC), who emerged victorious at the just-ended 10th National Delegates Congress held at the Accra Sports Stadium on Saturday 17th December 2022,” he said.

Meanwhile, he expressed his displeasure with the rancorous nature of the campaign in the build to the elections.

According to him, there were needless personal attacks and public injury to the hard-won reputations which should not have happened.

He said this has the potential to affect the party going into the 2024 elections.

“While this elections needlessly witnessed the worse form of inner vilification, personal attacks and public injury to the hard-won reputation of our Party through various means of public spaces and on social media platforms, this insensitivity would inadvertently affect our restitution, unity and cohesion needed to engender the collective prosecution of our agenda for victory 2024.”

Meanwhile, Mr Ofosu-Ampofo has asked the leadership to help the party heal quickly from it and move forward.

“Let us appreciate that this victory is simply a prelude to the battle ahead of us.

“I pray that we quickly recover from our individual pain and dented reputation to restore our public morality so we can join forces to soldier on,” he added.

Mr Ofosu-Ampofo lost his bid to be retained as the National Chairman of the NDC to the former General Secretary, Mr Johnson Asiedu Nketia.

This happened at the party’s 10th National Delegates Congress held on Saturday, December 17.

Delegates of the party converged at the Accra Sports Stadium for the exercise, with 9,200 delegates from the 276 constituencies taking part in the exercise.

DISCLAIMER: The Views, Comments, Opinions, Contributions and Statements made by Readers and Contributors on this platform do not necessarily represent the views or policy of Multimedia Group Limited.
Tags:
Asiedu Nketia
Mahama
NDC
Ofosu Ampofo