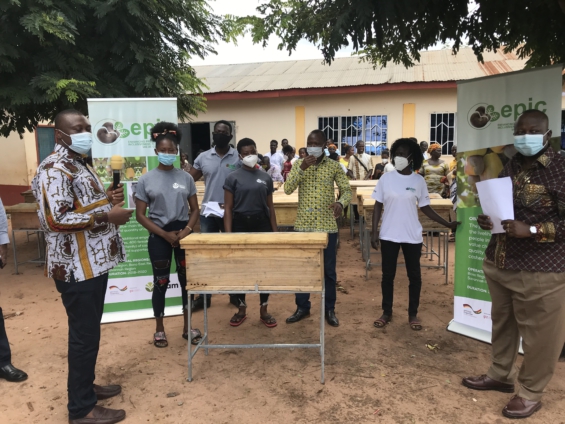 OLAM Ghana Cashew in partnership with German development agency GIZ under its EPIC project aimed at improving the livelihood of cashew farmers and their households is providing technical and infrastructural support on beekeeping to female dependents of cashew farmers in order to create sustainable jobs to generate an alternative source of income.

A total of 400 female dependents of cashew farmers in the Bono, Bono East and Savanah Regions have received beekeeping training, and additional two hives each, and harvesting and processing equipment.

These beehives are placed in the cashew orchards which also have the benefit of inducing and increasing pollination due to the services of their bees which in return increases yields of the Cashew.

The move which targets females, especially the youth, who depend on male cashew farmers, is to provide an alternative source of income to support their households and also help ease the responsibilities on the male cashew farmers to be able to focus on their plantations.

At least, 500 beehives and other equipment made up of honey presses and Personal Protective Equipment (PPEs) were distributed to beneficiaries during the first phase of the project and an additional 1,100 would be distributed in the second phase to increase the number of hives to 4 per beneficiary, thereby increasing their production capacity.

At the launch of the second phase of the project in Mesidan under the Techiman North District of the Bono East Region, Branch Manager of OLAM Ghana Cashew Mr. Yussif Amankwa called on the beneficiaries to work towards making the project a success as it is capable of alleviating poverty in the rural community.

Programs Director of GIZ Mr. John Duti indicated that the partnership which is targeted at improving the incomes of 25,000 farmers has been fruitful with over 10,000 farmers covered already.

“We are hearing some of them are making incomes of Ghc800 and we hope that with the additional hives that we are giving them, they will make more income and that would attract more youth into beekeeping”, Mr. John Duti added

For participating farmer Adutwumwaa Comfort from Asueyi, this means a 15% increase in her income over the year: “I am sure I would be able to harvest about 40 lbs of honey from my apiary next year. Olam has provided me an opportunity to earn additional income during the cashew lean season so I can support my children’s’ education.”

DISCLAIMER: The Views, Comments, Opinions, Contributions and Statements made by Readers and Contributors on this platform do not necessarily represent the views or policy of Multimedia Group Limited.
Tags:
Bee keeping
Cashew farming
Olam Ghana