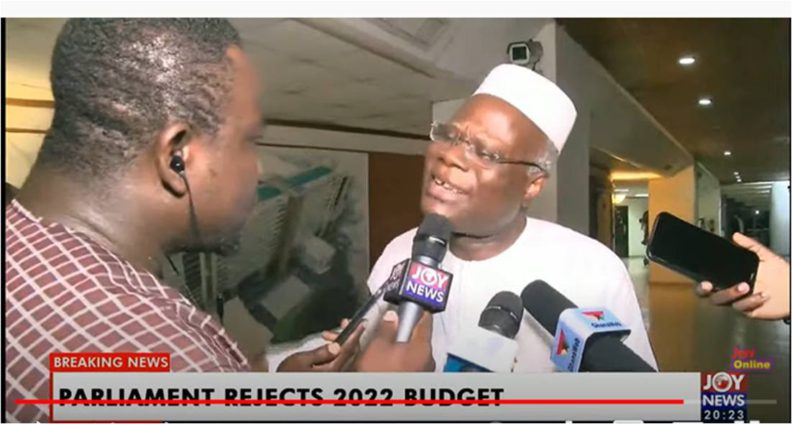 Member of Parliament for Adansi Asokwa, K.T Hammond has described as unconstitutional a decision taken by Parliament concerning the 2022 budget.

He said that the House will revisit discussions on the budget on Tuesday, November 30, 2021.

“The matter is alive. Parliament has not constitutionally rejected our budget. Meet us on the floor on Tuesday to deal with the question of the constitutionality of what has happened. The budget has not been rejected and we will revisit it,” he told Joy News’ Kwesi Parker-Wilson.

Parliament on Friday evening unanimously rejected the 2022 budget which was presented by the Finance Minister, Ken Ofori-Atta.

The rejection of the budget took place in the absence of the Majority caucus.

The Speaker had contended that their non-appearance will not deter the House from proceeding with its business.

Subsequently, the Speaker ruled that the motion for the passage of the budget as presented by Ken Ofori-Atta had been lost after a voice vote.

“The No’s have it. The motion is accordingly lost,” Alban Bagbin declared.

When K.T Hammond was asked why the Majority caucus boycotted Parliament, he said that “we had to go out and reorganize a few things.”

He insisted that the Speaker’s ruling was unconstitutional.

The Finance Minister had appealed to the Speaker to allow him to further engage the leadership of Parliament over the budget.

But the appeal was turned down by the MPs through a voice note.

The Deputy Majority Leader, Alexander Afenyo-Markin, then challenged the Speaker’s ruling and called for a division.

A division is a form of voting from MPs whilst ensuring that all non-MPs are cleared from the lobby.

In view of that, the Speaker directed that all non-MPs will have to vacate parliament for that form of voting to take place.

At this time, the Finance Minister was in the chamber, yet was not a Member of Parliament. His presence was opposed by the Majority MPs.

They contended that Ken Ofori-Atta was a Minister, hence, his ineligibility to be in the chamber.

After noticing that the General Secretary of the National Democratic Congress was in the public gallery, the Majority also demanded the removal of Asiedu Nketia from Parliament.

Whilst the NDC MPs remained calm, their colleagues on the other side created a chaotic scene, banging on the table and accusing the Speaker of bias.

Minutes later, the leadership of the Majority side staged a walkout. The Speaker then suspended the proceedings.

Several minutes later, the Speaker returned and asked if there was a quorum for business to continue. After establishing that proceedings could continue, he put out the question again – whether the appeal from the Finance Minister should be considered.

After the Minority had their way through a voice note, he proceeded to the main agenda of the day; the approval of the budget.

Alban Bagbin subjected the approval of the budget to a voice vote and the Minority had their way.

Lead convener of the Fixthecountry Movement, Oliver Barker-Vormawor has praised the Minority for “finally listening to reasoned voice”

Also, General Secretary of the National Union of Ghana Students, Anthony Kwame Julius has praised Parliament for rejecting the budget