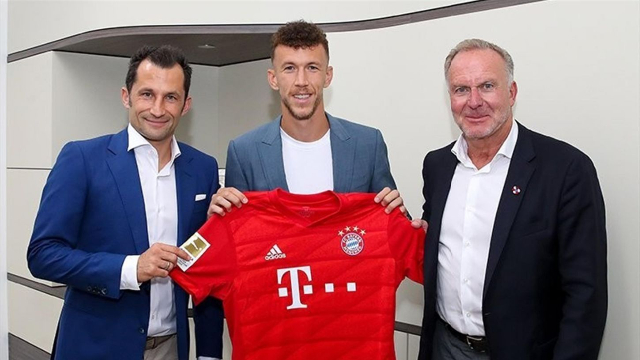 Bayern Munich have signed Ivan Perisic on loan from Inter Milan until the end of the season.

The 30-year-old Croatia international will join with immediate effect, with the option for Bayern to buy the winger permanently at the end of the 2019/20 season.

“Ivan will help us from the start with his extensive experience at a top international level,” sporting director Hasan Salihamidzic told the club’s official website.

“He has good technique and he’s flexible in attack. I’m sure Ivan will settle in quickly as he knows both the Bundesliga and our coach Niko Kovac well.”

Perisic said upon completion of his medical:

“I’m very glad to be back in Germany. FC Bayern are one of the biggest clubs in Europe.”

“We want to go on the attack, not only in the Bundesliga and the DFB Cup but also in the Champions League.”

Bayern had publicly expressed an interest to sign Manchester City winger Leroy Sane, but the 23-year-old Germany international tore his anterior cruciate ligament in the Community Shield win over Liverpool at Wembley earlier this month.

Perisic has played for Club Brugge, Borussia Dortmund, Wolfsburg and Inter in a decorated career, playing over 400 times for club and country.

He won the Bundesliga title with Dortmund in the 2011/12 season and helped steer Croatia to the 2018 World Cup semi-finals.

Perisic has 82 caps for the Croatia national team, scoring 23 goals.

The German champions, beaten by Dortmund in the German Super Cup earlier this month, kick-off their Bundesliga campaign against Hertha Berlin on Friday.