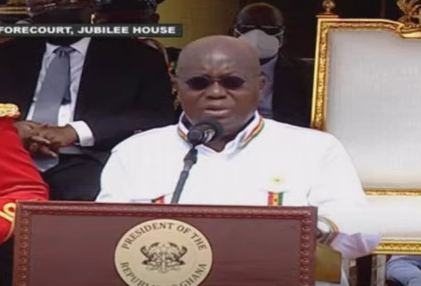 President Akufo-Addo says Ghana can become self-sufficient and prosperous when the citizenry works together.

Speaking at the country’s 64th independence day celebration held at the Jubilee House, the President urged all citizens to “step up and play significant roles in the development of Ghana, our motherland.”

According to him, the vision of a progressive and prosperous Ghana held by the country’s fore fathers must linger in the hearts of many as the nation symbolizes the hope of Africa.

“We were the first nation in colonial Africa to gain our independence from colonial power. The mood of citizens of this new state was one of unrestrained excitement and jubilation because of the prospects of what the future held for us.

“Later that night at the old polo grounds, that vision of what an independent Ghana could be, that is a prosperous progressive country which is to be an active player in the affairs of the continent and the world was eloquently laid bare by our historic leaders. We were an example for the rest of Africa to follow.”

He further iterated that all persons must work together in ensuring an economy that is capable of creating opportunities for all.

“It has taken quite some time for us to get there but I believe there is far more self-confidence among us Ghanaians today than there has been since the early days of self-government. And we can make it if we work at it,” he emphasized.

Highlighting some achievements chalked by the country, President Akufo-Addo stated that Ghana has been considered as one of the most growing economies in the world, leading to the presence of a foreign direct investment in West Africa.

“We have become self-sufficient in food production and for the first time in a long while, exported our surpluses to our neighbours. Sustained efforts through digitisation, we are being made to formalise our economy and we have hastened our critical journey of industrialisation and value-added activities whose results will be to create jobs for the teeming masses of Ghanaians,” he stated.

He, however, mentioned some challenges the economy has been subjected to due to the coronavirus pandemic.

President Akufo-Addo added that some alterations were made to the usual military and school parade held in honour of Ghana’s independence celebrations.

Meanwhile, the President is calling on all Ghanaians to avail themselves for the ongoing vaccination exercise in the country’s fight against the virus.

“We cannot afford to let go of the enhanced hygience and mask-wearing protocols which should define our way of living. These protocols have not only helped in the fight against Covid-19 but has also helped ensure Cholera, for example is no longer a health concern.”

According to the President, government has taken steps to revitalise the Ghanaian economy.

He noted that his new administration will ensure the provision of social amenities that include hospitals, schools, and also eradicate the unemployment phenomenon.

“A year from now, every district and region should have hospitals were residents will be able to have decent and affordable healthcare.

“Fellow Ghanaians, this is not beyond us. If we put our hearts and minds to it, we who were the first to gain our independence in colonial Africa can make it and protect our heritage and environment,” he added.

DISCLAIMER: The Views, Comments, Opinions, Contributions and Statements made by Readers and Contributors on this platform do not necessarily represent the views or policy of Multimedia Group Limited.
Tags:
64th Independence Day
Akufo-Addo
Jubilee House