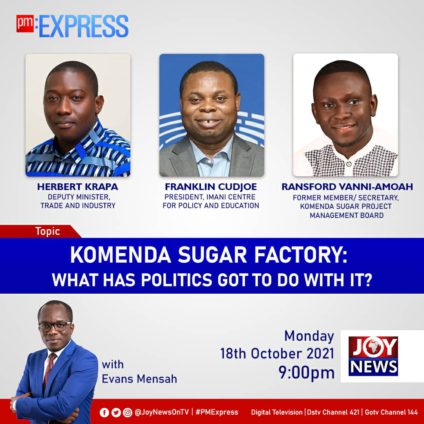 The Komenda Sugar factory, built from an Indian Exim Bank facility by the erstwhile Mahama government has not been in operation since its commissioning in 2016.

The factory that was projected to create employment for the residents of the Central Region has been a topical issue lately because it has been left to rot for close to five years.

According to former President John Mahama, who has been blamed by the incumbent government for the present condition of the $35 million factory, the Indian government prevailed on his administration to get the factory ready and later apply for funds to support the production of raw materials.

But President Akufo-Addo in reaction has stated that this approach goes against every viable business practice.

He further indicated that despite Komenda Sugar Factory being a big albatross around government’s neck, his government would never consider abandoning it.

The president has meanwhile given the assurance that the factory would be operationalised in the first quarter of 2022.

Tonight on PM Express, host, Evans Mensah found out whether the discourse on the Komenda Sugar Factory has been politicised by the two major political parties in the country.

He engaged with Deputy Minister of Trade and Industry, Michael Okyere Baafi, former member and Secretary of the Komenda Sugar Project Management Board, Ransford Vanni-Amoah and Franklin Cudjoe, President of IMANI Centre for Policy and Education.