Jennifer Lopez has said learning to pole dance for her latest movie was “one of the hardest things I’ve ever had to do for a role”.

The actress stars in Hustlers, which premiered in Toronto on Saturday.

“In my mind, it sounds like a really great thing, ‘Oh, I’m going to learn to pole dance it’s going to be so much fun!” she said on the red carpet.

“But then it was like, oh my God, this is the hardest thing. How are you spinning? How do I stop myself?”

Hustlers, released in the UK next week, follows a group of New York strippers who work together to extract as much money as possible from their Wall Street clients.

They go to extreme lengths to get them to part with their cash, including plying the clients with drugs and alcohol so they don’t realise how much money they’re spending.

The film, which also stars Constance Wu and Julia Stiles alongside Lizzo and Cardi B in smaller roles, is based on a true story and was inspired by a New York Magazine article that went viral in 2015. 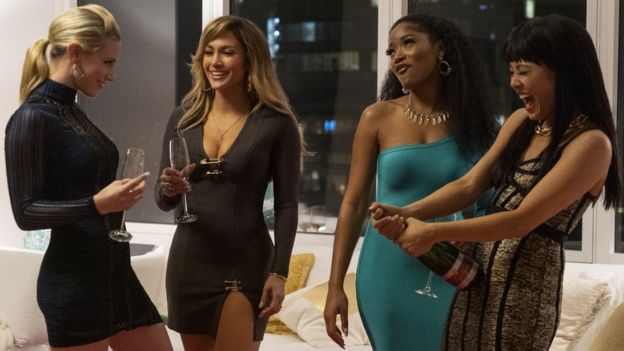 Friendship and sisterhood are key themes in the film, but it also relies heavily on gratuitous sexual scenes, including an full pole-dance routine from Lopez to Fiona Apple’s song Criminal.

The actress said she “got dizzy” while training and was left “bruised” – despite her considerable dance experience.

“You would think it would [help] being a dancer, but it really doesn’t, it’s totally different,” she told reporters. “I mean yes, I’m aware of my body, I move well, but it did not prepare me for the acrobatics, for the strength it would take for me to do what I had to do.

“Luckily I had a great teacher, who was teaching me great technique of how to pull it off but it was one of the hardest things I’ve ever had to do for a role, and it really hurt.”

While Hustlers is premiering at the Toronto Film Festival, where many films battle for Oscar attention, this is a movie which is realistically likely to do better at the box office than in awards season.

“After the dog days of August, littered with one lazily patchworked Hollywood product after another, there’s something wickedly indulgent about the arrival of Hustlers, a slick, flashy, seductively entertaining segue from one season to the next,” wrote Benjamin Lee in The Guardian. 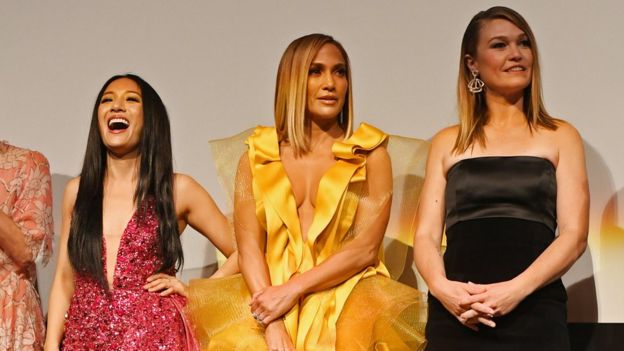 Constance Wu, Jennifer Lopez and Julia Stiles took part in a Q&A at the screening

“It’s ideally positioned, premiering at the Toronto film festival before a mid-September release: it matches the immediate gratification of a summer movie with the artful substantiveness of an awards contender – yet remains not quite definable as either.”

“It’s a classic underdog story,” said The Hollywood Reporter. “Although the women of Hustlers are clearly stepping over a very thin, dark line between working the system and criminal behaviour, you can’t help but root for them and all women who are tired of struggling financially and decide to use what they know to get ahead.

“The film impressively somersaults past any stigma attached to stripping and sex work, emphasizing how the main characters are run-of-the-mill American workers regardless of their particular job.”