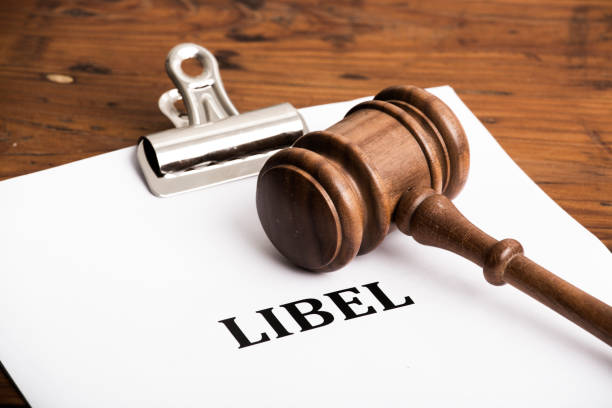 Libel file in court with gavel

A Private Legal Practitioner and Professor of Accounting, Professor Kweku Asare, has criticised the Ghana Police Service for its recent application of Sections 207 and 208 of the Criminal Offences Act, 1960 (29).

Prof. Asare specifically disapproved of the manner of arrests (particularly of journalists) made on grounds of offensive conduct and publication of false news.

Speaking on JoyNews’ The Law, Sunday, the Professor, popularly known as Kweku Azar, intimated that this mode of applying the law is quite problematic and a back door approach of re-introducing the Criminal Libel Law, which was repealed in 2001.

“The Police, when they have invited journalists for saying something that was false, they always said they’ve invited them because they are inducing fear and panic in the public. This is palpably false and this is not the reason why we have Section 208,” he said.

He further explained that Section 208 of the Act was meant to prevent situations as witnessed in 2010 when someone sent a false message that an earthquake was imminent and people actually went out sleep on the streets.

He stated that type of news (hoax) disrupts public life, takes valuable resources away from law enforcement agencies to deal with the situation, and should not be countenanced and “every country has a version of that law to maintain law and order.”

His concern follows the arrest of four persons for propagating falsehood through the media.

Within a period of two months, the Ghana Police Service has arrested and charged four Ghanaians for publication of false news and offensive conduct conducive to breaches of the peace.

The presenter has been handed 14 days jail term by the Accra High Court after Godfred Dame, the Attorney-General charged him with contempt. He was also fined GH¢3000 by the court presided over by Justice Elfreda Dankyi. Justice Elfreda Dankyi said the 36-year-old was guilty of the charge against him.

According to the Police, a formal complaint was brought against the suspect by the Ghana Armed Forces regarding allegations that members of the President’s family traveled on the presidential jet to the UK for shopping. He was granted bail of GH¢50,000 after pleading not guilty to two criminal charges.

An Accra FM presenter, Kwabena Bobie Ansah was also picked up by the Police after his late evening programme on February 10, 2022.

He was also charged with the publication of false news and offensive conduct but was later granted a GH¢50,00 bail by the Kaneshie District Court.

The Bono Regional Chairman of the New Patriotic Party, Kwame Baffoe, also known as Abronye DC was also arrested and charged for publication of false news and offensive conduct.

The Police said that preliminary investigation established that his claims against former President John Mahama that he is plotting a coup, were untrue. Abronye DC was subsequently arrested.

The Police in a statement revealed that the NPP Regional Chairman failed to substantiate his claims, but he was later granted bail of ¢100k.

Reacting to the arrests, Professor Kweku Asare cautioned the Police against carrying out such arrests.

“We are not against limitations of speech, we are against impermissible and unjustifiable limitations on speech such as the misapplication of Section 208 to bring criminal charges against journalists who have made false statements about so-called big men,” he explained.

He found it unwarranted for the state to invest resources, going after people who have said unpleasant or defamatory things about “big men.”

“Let the big men themselves resolve that themselves. The so-called big men have all kinds of remedies open to them. They can go to the NMC and file a complaint, they can trigger their right to a rejoinder, they can go to civil courts and seek relief by way of the court, and so on,” he added.