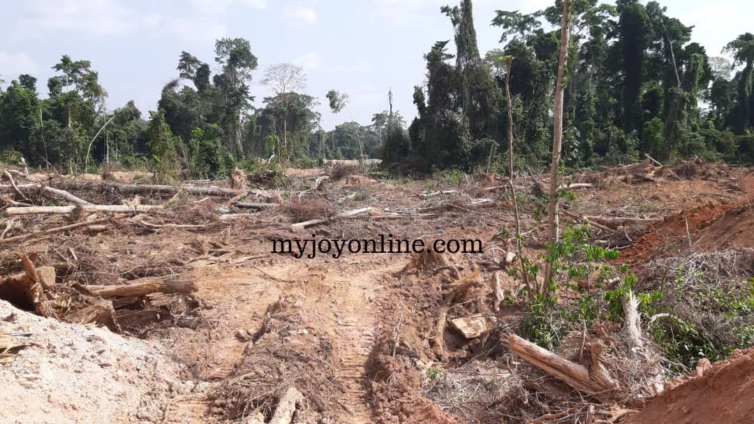 The Ghana Police Service says it has arrested the chief of Sefwi Elubo and his brother “in connection with illegal mining”.

In a statement dated September 17, the Police said, the arrest was made on Friday, September 16, in the Sefwi Elubo township in the Western Region.

According to the Police, it is also pursuing six other people in connection with illegal mining activities in the area.

“The suspects, Nana Anini Baffour and his brother Kwadwo Affi were arrested following Police investigation of a video circulating on social media showing illegal mining activities in some compound houses of the town.

Investigation has so far discovered dug-out pits from the compound leading to the bedroom of the chief’s brother”, the statement added.

In the release, which was signed by Director of Public Affairs, Grace Ansah-Akrofi, the Police further indicated that, “Four other deep dug-out pits have also been uncovered by the Police in other houses in the same vicinity”.

The arrest of the traditional leader comes at a time when there are widespread concerns about the involvement of chiefs in the illicit act.

Following the re-emergence of galamsey kingpin, Aisha Huang, some citizens have accused traditional leaders for being complicit in the act.

According to them, some traditional leaders conspire with illegal miners and give them lands to facilitate their mining activities.

In the wake of these developments, government has reaffirmed its commitment to dealing with the menace, and bringing all perpetrators to book.

Meanwhile, regarding the arrest of the chief of Sefwi Elubo, the Police said, “Investigation has further revealed that the chief, his brother and six other suspects who are on the run are the main people behind the illegal mining activities”

“As investigation continues, we would like to assure the public that all those involved will be brought to face justice”, the statement concluded.

DISCLAIMER: The Views, Comments, Opinions, Contributions and Statements made by Readers and Contributors on this platform do not necessarily represent the views or policy of Multimedia Group Limited.
Tags:
Galamsey
Ghana Police Service
Illegal mining
Sefwi Elubo