Police commiserate with families and victims of Atico accident - MyJoyOnline.com

Police commiserate with families and victims of Atico accident 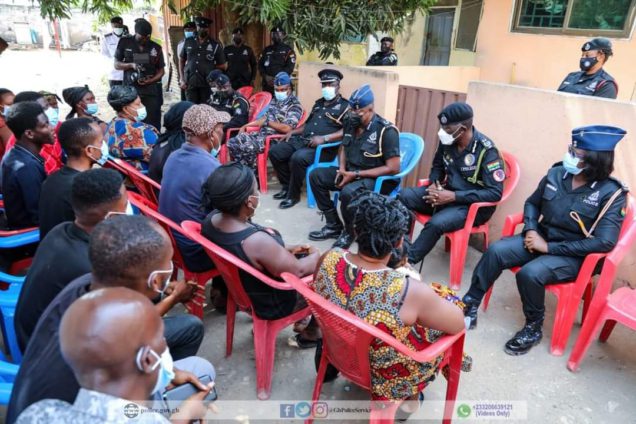 The Inspector-General of Police, Dr George Akuffo-Dampare and some senior officers on Saturday visited the families and victims of the Atico accident to sympathize with them.

The accident, which occurred on Thursday, January 13, 2022, left one person dead with two others severely injured after a police officer drove into bystanders at Atico junction.

One of the victims, Kofi Mensah, who is on admission at the Korle-Bu Teaching Hospital, was first visited by the team, where they interacted with the victim and his family. The IGP indicated that the Police will bear the total cost of the victim’s treatment.

The next visit was at Mataheko, a suburb of Accra, where the officers met the other surviving victim, John Mensah, at his residence.

After several interactions with the family, a police vehicle was assigned to convey the victim to and from the hospital until his full recovery.

Dr George Akuffo-Dampare and his team also visited the family of the late Dora Owusua, who lost her life while receiving treatment.

The Police administration extended their condolences and commiserated with the deceased’s family. The Service assured of their full support towards the burial and the funeral rites of late Dora Owusua.

The IGP stressed that “the police will conduct thorough investigations into the case and ensure justice for all.”

The police officer who drove the vehicle into the bystanders, General Corporal Mahmood Abdulai, was also visited at his residence in Kasoa. The team assured him of appropriate medical care to ensure his full recovery.

A statement from the Police noted that preliminary investigations into the accident so far reveal that General Corporal Mahmood Abdulai failed to exercise due care and attention, which led to the accident.

“Preliminary investigations so far into the accident indicate that the Police Officer, No. 50276 General Corporal Mahmood Abdulai of RDF Accra Region, was driving a Toyota Vitz taxi from Mallam direction towards Accra.

“On reaching a section of the Dr KA. Busia Highway opposite Atico Junction, he failed to exercise due care and attention and as a result, the vehicle veered off the road, onto the pavement at his nearside and knocked down three victims,” the statement said.