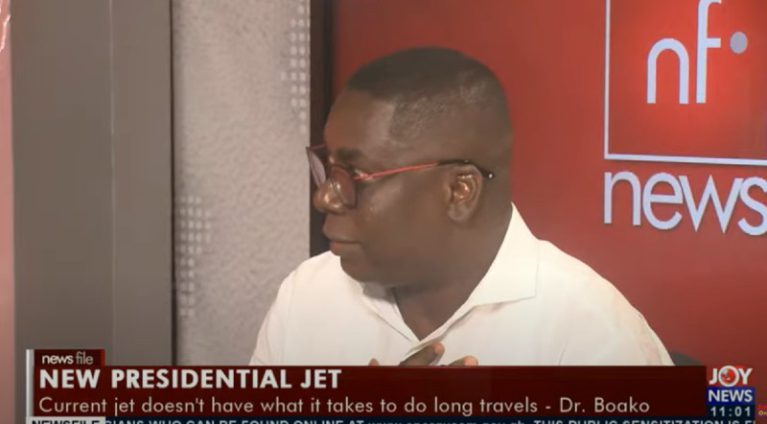 The spokesperson for the Vice President, Gideon Boako, says the current presidential jet is not fit for travels involving long hours.

According to him, prior to September 2018, President Akufo-Addo used the jet for his travel needs regardless of the distance, however, it developed some faults which created a problem when the Head of State had to travel.

“The National Security advised that the presidential jet in such a state will not be proper for travels across the Pacific and the Atlantic oceans. So,  it is not a decision that the President gets up to say ‘today I am not using this jet’.

“Anytime the President is travelling within ECOWAS, he has been using the presidential jet, it is only when he is going on a long haul journey beyond four hours, that he uses chartered flights,” Dr Boako said on Newsfile, on Saturday.

This development, he added, has prompted the decision to buy a bigger jet to cater for all presidential travels.

His comment comes after Ranking Member on Parliament’s Foreign Affairs Committee, Samuel Okudzeto Ablakwa, questioned what he described as the extravagant foreign travels of President Akufo-Addo on private planes.

This generated discussions with some Ghanaians asking why the President has to fly in hired private aircrafts when the country owned a functional presidential jet.

But the Defence Minister, Dominic Nitiwul told Parliament that the configuration of the current Presidential jet, a falcon 900EX purchased during the era of former President John Kufuor, did not meet the travel needs and security of the President.

On September 27, Director of Communications at the Presidency, Eugene Arhin disclosed that government is in the process of acquiring a bigger aircraft for presidential travels.

“Government is already in the process of acquiring a bigger jet for use,” he said at a press briefing at the Jubilee House on Monday.

However, the Minority in Parliament says it will not support the presidency’s bid to procure a new presidential aircraft.

According to Haruna Iddrissu, the planned acquisition is a total waste of time and public resources.

But, Dr Boako who disagrees, says the President is not trying to create a certain level of comfort around his travels as it has been speculated.

He said that this is a national security matter which involves the safety of the President; adding that people can rather suggest the limit to which the President can spend on charted flight.

“If we all come to the realisation that as a country, this (presidential) jet is not in good shape, when we are going for a chartered flight lets go for a flight that costs X amount and then we will know that within that range of expenditure it is good for the country.”

“As we speak now, we are unable to tell whether or not what the President uses is over expensive, moderately expensive for less expensive,” Dr Boako said.