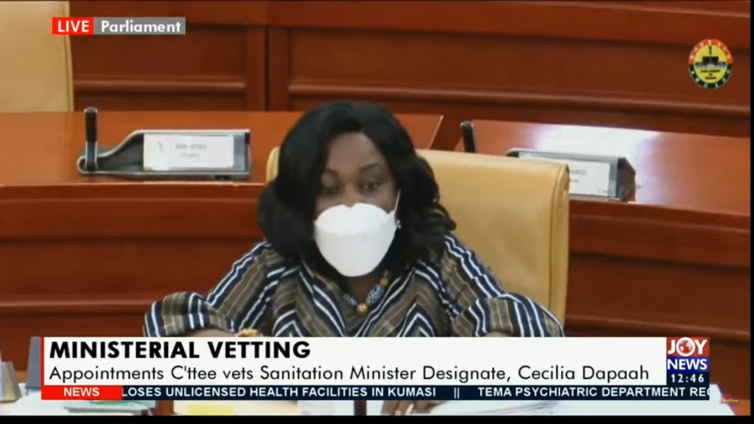 Sanitation Minister-designate, Cecilia Abena Dapaah has touted the success of President Akufo-Addo’s fight against galamsey (illegal small-scale mining) in view of the improved quality of the country’s water bodies.

In answer to a question posed during her vetting on Tuesday, Mrs Dapaah mentioned that a change in the turbidity of water bodies in the country for the better is proof that the war on galamsey has so far been successful.

“We have the Water Resources Commission that is in charge of monitoring our water bodies. And since the President’s declaration of war on illegal mining, we have Monitoring Units that go round and submit quarterly reports.

“And I must say that the water quality as of July 2020 was quite good with their turbidity levels,” she told the Appointments Committee.

Citing some water bodies in the country, Mrs Dapaah said “the turbidity of Birim River in Akyem used to be 1,590 NTU but it is now 268 NTU. Ankobra in Axim which used to be 4,432NTU is now 503 NTU. And these are the figures we have as of July 2020 we will be getting the figures for 2020 December.”

In view of this, the Minister Designate called on the citizenry and relevant stakeholders to deepen their fight against the menace that is gradually taking a toll on the environment.

“Mr Chairman, in essence, the war that the President declared on galamsey was successful in a way vis-à-vis our water bodies. So we should continue to support our President to fight this war,” she urged.

Furthermore, according to Mrs Dapaah, Ghana produces the best water in the world.

She explained that treated water from the Ghana Water Company Limited has one of the highest pH levels making its quality one of the “best you could ever find.”

DISCLAIMER: The Views, Comments, Opinions, Contributions and Statements made by Readers and Contributors on this platform do not necessarily represent the views or policy of Multimedia Group Limited.
Tags:
Appointments Committee
Cecilia Dapaah
Galamsey
Illegal mining